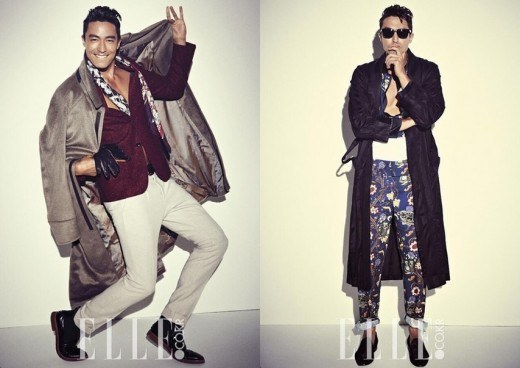 Movie actor Daniel Henney potsed pictures of himself in a photo shoot of ELLE on his Twitter on the 26th.

He looks humorous in the pictures as he is tugging on his scarf with a joking face. He also looks like a trot singer the way he slightly bites his lip.

Another picture shows him wearing a blue suit with matching sunglasses and black coat.

Netizens say, "Is that Daniel Henney?", "He's handsome even in ugly clothes", "Aren't they pajamas?" and more.

Daniel Henney took on the role of an attractive man who seduces Yeong-hee (Moon So-ri), the wife of Korea's best spy Cheol-soo (Sol Kyung-gu) in the recent movie "The Spy".

"Daniel Henney's flowery look"
by HanCinema is licensed under a Creative Commons Attribution-Share Alike 3.0 Unported License.
Based on a work from this source