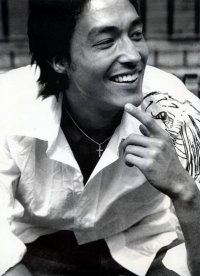 Pretty boy of the small screen Daniel Henney has become the hot topic among producers with his reported facility with languages. His roles in the TV drama "My Name is Kim Sam-soon" and "Spring Waltz" were of the gentlemanly type that melted the hearts of many young women, and in his new film "Seducing Mr. Perfect" (directed by Kim Sang-woo), he speaks English, German, Chinese, Japanese and Korean. Henney brings to life a Harvard Law School graduate who combines amazingly good looks with talent.

Henney, speaking English, is paired with Uhm Jung-hwa, who speaks Korean for a kind of global communication. Henney's lines were originally translated from Korean into English and then the native English speaker fixed the script to make it sound natural. But he also showed a hitherto hidden skill when speaking Japanese. Although he has never studied the language, Henney is able to pull off an almost perfect dialogue in a scene where he is dealing with Japanese businessmen.

"When I heard Henney speak Japanese, I realized that he has an amazing skill for languages", the executive producer says. "I hear that he made an MP3 recording and listened to it over and over again for practice". The actor already has a fine command of German, which he showed off in "Spring Waltz" in the role of global manager Phillip. But what is more surprising than any of these is his Korean skill. He is almost completely comfortable with day-to-day Korean, and word is that Henney has no problems communicating with those on set. In the movie, the actor delivers a final flourish in what is a fiendishly difficult language for foreigners to learn.