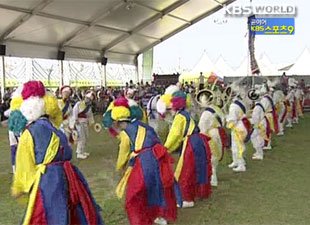 A festival opened in Gangneung Wednesday to celebrate Dano, a traditional Korean holiday that falls on the fifth day of the fifth month on the lunar calendar.

For the next eight days, the Gangneung Danoje Festival will feature a diverse array of more than 70 different acts and events, including performances and reenactments of traditional customs.

A parade made up of some five-thousand people is set to take place on Friday.

People from nearby Pyeongchang and Jeongseon flocked to the festival to wish for Pyeongchang's successful hosting of the 2018 Winter Olympic Games.

The festival is listed on UNESCO's Intangible Cultural Heritage of Humanity list.

"Danoje Festival Opens in Gangneung on Wed."
by HanCinema is licensed under a Creative Commons Attribution-Share Alike 3.0 Unported License.
Based on a work from this source