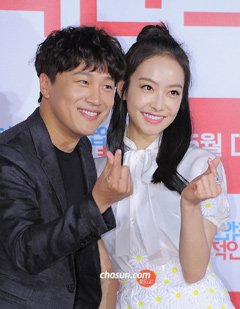 The sequel "My New Sassy Girl" to the 2001 hit romantic comedy "My Sassy Girl" will be released in China and Korea.

Cha Tae-hyun, who played the lead in the original, stars with Chinese-born member Victoria of girl group f(x).

"As a continuation of the original story which deals with dating and relationships, the sequel is more about a marital life", Cha hinted during a press event on Wednesday.

"I'm more nervous than when I debuted with f(x) as it is my first film. But Cha helped me a lot and made me feel really comfortable while filming", Victoria said.

The sequel will hit Chinese theaters in late April and theaters here in May.

"Debut Film of Chinese Member of f(x) to Hit Theaters in May"
by HanCinema is licensed under a Creative Commons Attribution-Share Alike 3.0 Unported License.
Based on a work from this source