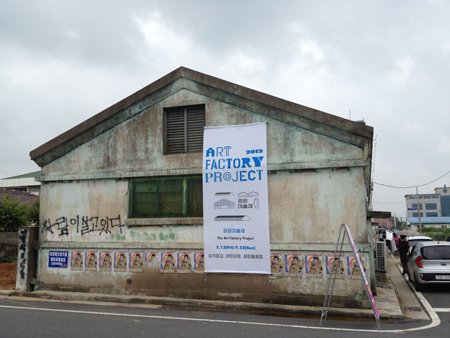 The inaugural Sunset Janghang Festival is hosting various art and culture events around the South Chungcheong Province port town through Sunday. In this photo, the organizers have turned a granary from the Japanese colonial rule (1910-1945) to an exhibition space for contemporary artworks. A main international port in the early 20th century but now largely neglected, Janghang is today riddled with abandoned century-old structures and its population has dropped to about 13,000 from its high 100,000./Korea Times photo by Kwaak Je-yup

JANGHANG - The vacation traffic jams clogged up the main freeways out of Seoul last Saturday. But as this reporter's car approached the smallish seaside town, only a few other cars were in sight, the promotional flags attached to lampposts outnumbering the vehicles on the road.

Such is the reality this town in the South Chungcheong Province faces today. Located at the mouth of Geum River next to the Yellow Sea, it was one of the four main ports of the Joseon Kingdom (1392-1910) and a fledgling metal refinery center under Japanese rule (1910-1945). Then, it was fast forgotten after the refinery closed in 1989. The population, which reached 100,000 at its height, is now down to only around 13,000. The facility's gigantic chimney still stands, neglected and ignored.

Now the town is trying to recapture its lost glory with a full-fledged cultural project with the backing of Seocheon County, which comprises of Janghang and 12 other municipalities at the southwestern end of the province.

"Young people have left", said Choi Jung-han, the chief consultant and the mastermind behind the effort best known for creating Seoul's popular monthly nightlife event, Hongdae Club Day. "To reinvigorate this place, you need new energy from outside. I saw the beautiful historical spaces here and felt they could be restyled for that purpose. For now, there's a limit to how much industry it can attract, and there are no immediate plans for that either. So I tried to start with a sort of an 'art camp', where outsiders can stay for a while first". 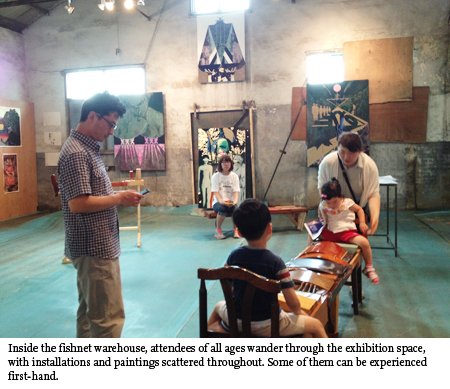 And that is how the inaugural Sunset Janghang Festival came about. The 10-day event began last Friday and runs through Sunday, with a variety of concerts, exhibits and activities taking place concurrently.

The turnout has been healthy so far: according to the county spokeswoman Sung Geun-ri, more than 14,000 people have attended in the first four days, braving the constant drizzle of the monsoon season. There are no hour-long lines, but outsiders, mostly artists and hipsters from Seoul, generated waves of movement inside and between venues as the town's many elderly residents went about their daily business without taking much interest in the brouhaha.

"An old lady came up to me and asked: 'What does sunset mean?'" said Park Hye-min, a visitor from Seoul pursuing graduate studies in urban architecture, referring to the festival's English name that most locals did not seem to understand. Choi also admitted to some boardroom conflicts leading up to the festival, though he would not disclose the specifics.

But he defended the name, as the symbol of Janghang's ongoing renaissance: "Exhibitions are temporary. You must stay there to really feel the place. Only after sundown can you truly seep into the place - bathe in it". The environment and land, transport and maritime affairs ministries are building large-scale research facilities nearby, in a concerted effort by the county for a plan for regional regeneration, yet Choi argues that economic and cultural impacts can become permanent only when these facilities can attract people from outside - and have them stay for longer. 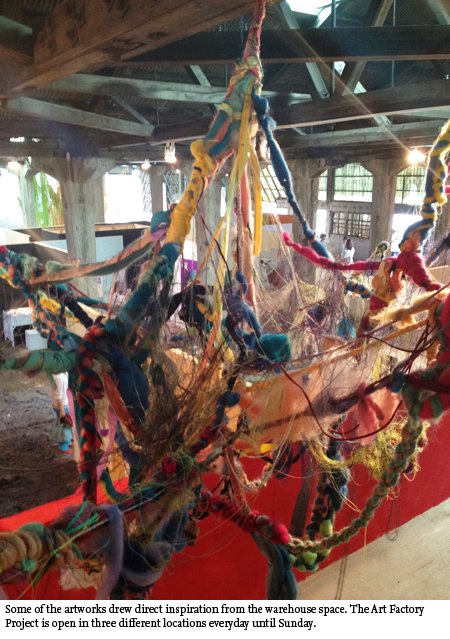 At the Art Factory Project, where the works by about 140 young artists were displayed under the roofs of two storage buildings and a factory, all built during the Japanese colonial period and abandoned for decades. Another building in disuse is currently under renovation to make artist studios.

"I heard about the initiative, and I think it's a great idea", said Wang Ja-eun, one of the participating artists, at the granary. "Everything has moved to the new Janghang area (north of the old town), and now all of these buildings are empty".

"I love that they are not dusted completely. You see the original roofs and crossbeams. It's difficult to keep these structures... and their characters intact", said Lee from Chuncheon, Gangwon Province, working in culture management and visiting with a large group from her hometown to find inspiration. She requested partial anonimity on personal grounds.

Though Choi admitted his concerns about the target audience - "which eye-level we're going to fix first" - the locals of all age groups brave enough to attend seemed moved.

At the smaller fishnet storehouse, too, adults contemplated for a few minutes in front of various bizarre-looking contemporary artworks, while their children ran around, showing more interest in touching and sitting on some colorful sculptures. "It's been a while since I've seen something different", said Jeon Chung-ho, a father of two and local resident.

Elderly couples from Gunsan, North Jeolla Province across the Geum River, were wearing hiking gear but strolled in because they found the works visually appealing. "They're pretty", said Park Sun-deok, a housewife. "I do enjoy going to exhibitions, but they don't come this way often, you know?"

The most crowd-friendly event was probably the Media Art School at the old Janghang Freight Train Station, which is rarely used though still fully functional. Several booths had interactive media workshops and activities for children and uninhibited adults, with their physical movements bringing about changes on different screens.

"We wanted to bring the community to the project", said Manuela Naveau, a director at Ars Electronica, the world pioneer in interactive art headquartered in the Austrian city of Linz. Its Wild Card program, where participants used an iPhone app to give photographic feedback to the artists, was a prime attraction.

It remains to be seen whether this decayed port town can emulate the success of the industrial city of northwestern Austria, but Choi keeps dreaming.

"It's obvious we can't change things in one or two years. People of art and culture will come together slowly and create an ecosystem of sorts", he said. "Of course, this has drawn some controversy here, but it is really up to Janghang to choose. Will they leave it as it is or do something to bring outsiders in?"

The inaugural Sunset Janghang Festival continues through Sunday. Check the program in advance for different activities' schedules. For more information (in Korean only), visit www.sunset-janghang.com. English information can be found on www.worknplay.co.kr.