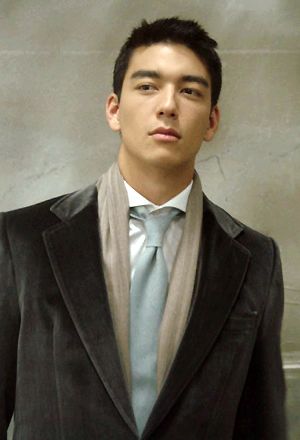 "I'd like to be recognized as an actor and a model in my mother's homeland", says the man who spins on the ground before approaching an unknown woman in the Sky cell phone commercials, and appears with well-known actress Kim Tae-hee as a newly-wed couple in Daewoo Klasse ad's. Known as "Daniel Henney Mark ll", Dennis Oh'Neil (24) wants it known that he is more than just a pretty face.

So before the curiosity aroused by the commercials wanes, MBC in a surprise move cast O'Neil in the lead role of its miniseries "Spy", which hits the airwaves on Nov, landing him in the focus of the entertainment world for the rest of the year. Born to a Korean mother and a former GI father, O'Neil has consolidated his top model status, appearing in 15 commercials across Asia, including Hong Kong, Taiwan and Singapore.

Slightly more Asian-looking than his fellow half-Korean star Daniel Henney, O'Neil would prefer it if the two were not lumped together. "Daniel Henney is an excellent model and actor, and I'm grateful to him for in effect opening the door for mixed-race actors in the Korean entertainment industry. But now I'd like to try to find my own image, one that is distinct from his", he says. O'Neil started modeling at the age of 16, but because of his studies was unable to devote all his energy to it. In college he majored in photography, a subject he remains attached to in his spare time. He is thinking about becoming a professional photographer when he retires from the entertainment industry.

Standing 1.88 m tall, O'Neal takes pride in his trim, well-toned body ? a reward for the sporting life. "How did you like my tumbling in the cell phone commercial? I did it myself. I'm confident in my athletic abilities because I used to wrestle and play football and martial arts when I was a kid". Even though he has an "everybody's sweetheart" look, there is only one woman in his world: the girlfriend waiting for him back in Florida. He said the biggest let-down about working abroad is not being able to see her. She gets mad, he says, but he has no idea what to do about it.

It is fortuitous that O'Neil is making his acting debut in a Korean soap, since soaps were his spur into acting. "My mother always used to watch Korean movies and soap operas, so I would watch them with her. Since then I have been slowly drawing closer and closer to my dream of becoming an actor", he says. He hopes the Korean public will continue to support him.