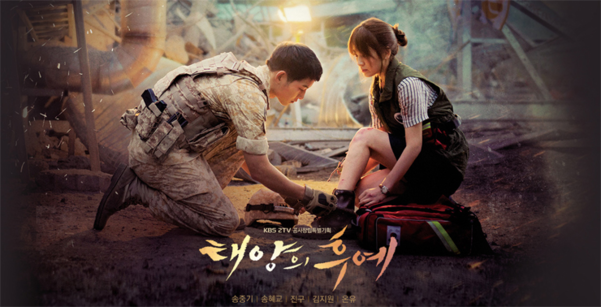 A Song Joong-ki photo zone was set up then taken down at a shopping mall. The advertisement company had requested it be taken down for 'copyright and portrait rights'. The shopping mall decided not to pay up production aid funds and this led to a legal suit.

According to legal sources, companies I and H signed a contract for "Descendants of the Sun" production support of 100 million won; 20 million in down payment, followed by 40 million, and then the balance. H created a large standing signboard of Song Joong-ki to put up at the shopping mall's photozone. The signboard depicted the scene of Song Joong-ki tying the shoelaces of whoever sat in a chair where Song Hye-kyo had sat.

However, company I claimed it was infringement of copyright and portrait rights, and demanded it be taken down. H claimed I deceived them and didn't deliver the promised funds. "Company I signed a contract even though it did not have the right to allow "Descendants of the Sun" copyright and portrait rights, which led to the removal of the drama photozone by the shopping mall it was supposed to represent".

There was also a legal basis for canceling the contract. Article 5 of the contract stipulated that it was obligated by Company I to secure the use of cooperative notices, copyrights, and exposure to stores. In addition, in the event that Company I defaulted or fulfilled its obligations pursuant to Article 3 paragraph 2, the payment of production support could be postponed, reduced or reversed.

Company I filed a lawsuit. It insisted that the production support amount of 88 million, which was not paid by Company H, should be paid as the contract was fulfilled.

Kim Ji-young, a senior judge at the Seoul Central District Court, recently ruled in favor of the plaintiffs in a lawsuit filed by I against the company. The purpose of the project is to pay 82.5 million won, or 75 percent of production support. "Even after the demolition of the photozone, there were some promotional activities such as posting the poster on and offline, conflating shopping mall stores with the drama", Judge Cho said. "Production support according to the contract between the two sides should be fulfilled".

""Descendants of the Sun" Song Joong-ki Photozone Smacked with Legal Suit"
by HanCinema is licensed under a Creative Commons Attribution-Share Alike 3.0 Unported License.
Based on a work from this source