"Descendants of the Sun" Song Joong-ki, Song Hye-kyo and the rest of the cast 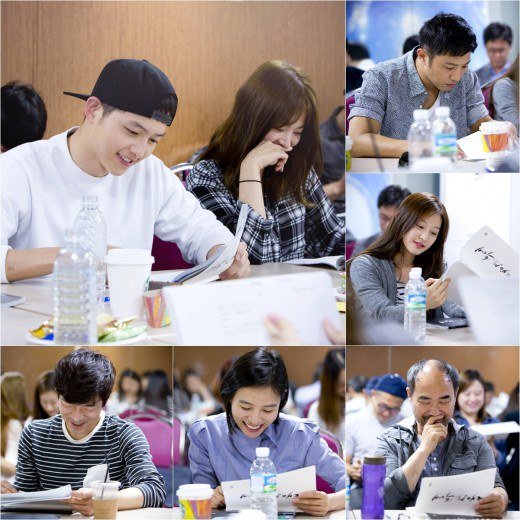 The script reading for "Descendants of the Sun" was held on the 28th at the KBS Hall. Media and reporters gathered on that day to take in the images of actors and actresses practicing their lines for the drama that is expected to be 'the drama' this year. Song Joong-ki, Song Hye-kyo, Jin Goo, Kim Ji-won, Kang Shin-il, Seo Jung-yeon, Lee Seung-joon and Hyun Jyu-ni were there to see each others' faces.

Director Lee Eung-bok started off the session with a speech, "I wonder if there will ever be a greater cast and staff than this. I hope we do well and I know we will. Until the day we round up again..."Writer Kim Won-seok-II also said, "It's an honor to meet all of you". Second writer Kim Eun-sook said, "This is my tenth drama and I hope you all work with me".

Song Joong-ki who has just complete National Service, said, "I dreamt of the day when I'd have another script in my hands while I was on duty. I am grateful for everyone being here and I will do my best". Song Hye-kyo rose from her seat to say, "I am happy to be here with great people and I think it's up to me to work hard".

Unlike other dramas, the script reading took place from the middle of the drama. The cast had fully understood their characters when they read their lines. Reality was added to the lines and the cast did the best they could. Laughter was added to the atmosphere and everyone cheered when there was romance between Yoo Si-jin (Song Joong-ki) and Kang Mo-yeon (Song Hye-kyo).

In the disaster scenes that occur in an imaginary space, tension flowed through the room and no one even dared to make a sound. The space was filled with doctors and soldiers who were there for a different purpose.

"Descendants of the Sun" is a human drama about people who dream of success in extreme conditions and will be broadcasted on KBS 2TV at the end of the year.

""Descendants of the Sun" Song Joong-ki, Song Hye-kyo and the rest of the cast"
by HanCinema is licensed under a Creative Commons Attribution-Share Alike 3.0 Unported License.
Based on a work from this source