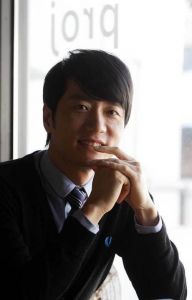 Kim Myung-min, who will transform to Jae Hyuk, a pharmaceutical agent working for a struggling company, will be working with Kim Dong-wan (his brother Jae Pil), Moon Jung-hee (his wife Kyung Sun), Uhm Ji-sung (his son, Junwoo) and Yeom Hyun-seo (his daughter Yeji) on the first day.  The scenes, which will actually be seen in the middle part of the movie, will be shot in the vicinity of Seoul.

During the day, Jae Hyuk's apartment will be the venue of the filming. The first scene is Jae Hyuk 's phone conversation with a senior colleague while he's walking across the parking lot, and the second scene is a dialogue between Jae Hyuk and Jae Pil at the hallway.

A car scene where Jae Hyuk takes his family to the hospital will be filmed in the evening. Family members Kyung Sun, Junwoo and Yeji will participate.

The big-budget movie based on real-life life parasites called "Yeongasi" or "horsehair worms" tells about Jae Hyuk's desperate fight against the mutated parasitic worms that have infected his family and have claimed hundreds of lives.

"Yeongasi" is the latest project of screenwriter-turned-director Park Jeong-woo whose works include "Jail Breakers - No. 815" (2002), "Dance With The Wind" (2004) and "Big Bang" (2007).  Production started on November 13th in Yeongduk, Gyeongbuk Province and the target release in Korea is mid-2012.