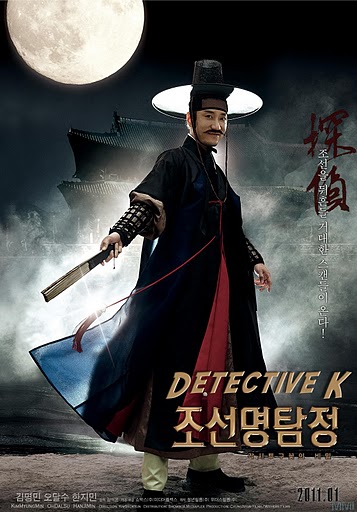 "Detective K" has crossed the 2 million viewers mark on the 9th day of its run in Korean box office.

According to data from the Korean Film Council, "Detective K" has attracted a total of 2,033,144 moviegoers on February 4, bringing in 15.5 million KRW in ticket sales.

February 4 also marks the highest admission for a single day at 418,686. The movie was screened at 632 venues.

On the Lunar New Year holidays (Feb 2-4), "Detective K" was also proven to be the best-selling movie. It boasted of an average of 330,000 moviegoers per day with 38.2% share for the period.

As "Detective K" continues to add screens coupled with positive reviews and good word-of-mouth which pull moviegoers to the theaters, it is most likely that the the movie could sustain its successful run at the box office in the coming days ahead.

The comedy-mystery movie follows the adventures of Joseon's great detective (Kim Myung-min) and his witty sidekick (Oh Dal-soo) as they secretly investigate a series of murder as ordered by the King. Han Ji-min plays the role of the alluring business woman who holds the key to the mystery. The movie which is produced by Generation Blue Films and distributed by Showbox/Mediaplex is directed by Kim Seok-yoon of the "Old Miss Diary - Drama" and "Old Miss Diary - Movie" fame.

""Detective K" crosses 2 million viewers mark on Day 9"
by HanCinema is licensed under a Creative Commons Attribution-Share Alike 3.0 Unported License.
Based on a work from this source