Did you know that (49) Show me the money 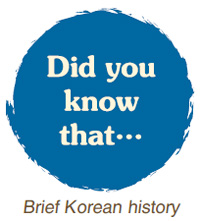 It was reported in December 1906 that a gang of "clever Japanese thieves" had made their way to Seoul. These were not your ordinary thieves. While they may have packed knives and guns they did not use them to extort money ― instead they used hypnotism! It isn't clear how successful ― if at all ― they were but some high Japanese officials felt it prudent to warn their Korean patrons to be extra careful in taking money to and from the bank (so as) not to get entangled in one of these (hypnotic) nets".

But not all robberies were committed in such mystic ways.

In Jemulpo (modern Incheon) a Japanese bank official needed to move a large sum of money to his bank. Rather than hire Japanese porters and guards to accompany him, he elected to hire a Korean coolie (porter). Korean coolies were famed for their strength, very cheap to employ and could be easily cowed when needed be.

With his coolie dutifully following him, they made their way through the busy streets of Jemulpo. It was a very warm day and the streets were crowded more than usual with not only the normal traffic of merchants and their wares but also the traffic associated with the arrival of several steamships. When they arrived at their destination, the bank official turned to tell the coolie where to place the money only to discover that he wasn't there. The coolie has absconded with the money leaving the foolish bank official the unpleasant task of justifying his stinginess to his superiors. The old adages: "a fool and his money are soon parted" and "a penny-wise and a pound-foolish", seem adequate descriptions for this anecdote.

On April 29, 1897, Alfred Stripling, an Englishman working for the Korean government, didn't take any chances when he transported nearly $1 million in silver and banknotes from Seoul to Jemulpo. As the railroad had not been built yet and the Han River steamships were notorious for breaking down or sinking, Stripling was forced to transport the money by 120 Korean ponies. Accompanying them "was a strong guard of soldiers and police" to act as escorts and to deter the bands of highwaymen that plagued the Korean countryside. Considering the ferocious temperament of the Korean ponies and their propensity to bite and kick anything that came near them ― bandits were probably the least of Stripling's worries. Nonetheless, he managed to get his shipment safely to the port.

But not all of the Korean government's money was so safe. In October 1896, a band of 10 thieves stole $7,786.95 from a Korean granary in Seoul that was being used as a vault. The Independent, an English-language newspaper in Seoul, was quite suspicious of the entire affair:

"In the heart of the city, police patrol the streets during the night, and the building itself has a dozen or so men to watch it. A band of robbers broke into it during the night, and, binding the entire force of watchmen, without making enough disturbance to arouse the policemen outside, escaped with their booty, and the affair was not known until the robbers were at a sufficient distance to be out of the clutches of the law.... The whole report appears to us to be rather fishy".

Eventually eight of the thieves were captured and $3,501.85 was recovered. The Chief of Police was reprimanded, the local police inspector fined 10 days' wages, the sergeant was dismissed and three policemen were arrested.

"Did you know that (49) Show me the money"
by HanCinema is licensed under a Creative Commons Attribution-Share Alike 3.0 Unported License.
Based on a work from this source