Did You Know? Tooth and stone 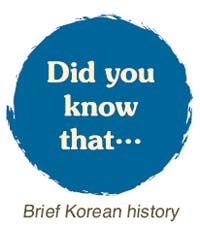 Many of the early Westerners to Korea during the late 19th and early 20th centuries had mixed impressions of Koreans. Described as a "fine and stalwart race of men" who were "tall and well formed" with a "physique infinitely superior to that of either the Chinese or Japanese" the Koreans were, nonetheless, looked down upon for their perceived unhygienic practices and outright physical filthiness. But there was one area of Korean hygiene that the foreigners grudgingly admired - the care of their teeth.

The Westerners, who suffered from very poor teeth, were infatuated and often made favorable comments upon the very white and well-maintained teeth of their Korean hosts. But not all Koreans had great teeth.

During the 1890s, Koreans suffering from horrendous toothaches often made their way to a large tooth-shaped stone just outside of Seoul. According to one early Western observer:

"Though I was not myself afflicted with the complaint in question (a toothache), I went one afternoon to witness the pilgrimage that takes place every day to this miraculous spot. A little altar stands at the foot of the hue tooth, and numberless tablets, certifying to cures, erected by thankful noble visitors and other, are fixed against the rock, with the name, date and year when the cures were effected".

He noted that crowds of men and women with swollen cheeks and in excruciating pain would file their way up to the altar, pay what they could afford to the keeper of the stone, and then pray while rubbing their cheeks along the stone's cold surface. For the lucky few there was relief - although temporary - and they were encouraged to show their gratitude by providing another donation. For the unlucky - and there were many - their fevered cheek-rubbing only led to even greater pain.

The stone's keeper then berated them for being cheap with their offerings and insisted that if they had paid a larger sum in the beginning the spirit of the stone would have relieved the pain instead of increasing it. And, as if to add salt to the wound, the sufferer was then encouraged to come back with a greater sum of money and try again. Seemingly, many did just that.

The Western observer sagely noted that when people were in pain they would do just about anything to relieve it.

Speaking of salt, not all Koreans had the benefit of living near the stone-shaped tooth. Some relied on other more unappetizing methods such as dead rats. According to the first resident Western dentist in Seoul:"The rat is covered with salt, and when anyone suffers from a toothache salt is taken from the rat and rubbed on the affected member".

When these methods proved to be ineffective the man of the house literally took matters into his own hands. With a set of pliers he would pull the offending tooth from the mouth of his wife or children.

But those were the beliefs and tools of the common man and not that of the royal family. Emperor Gojong, a champion of progressive thought, had his opportunity to show his people the benefits of modern dentistry.

In November 1903, while dining on clams, Gojong broke one of his teeth after biting down upon a stone that a careless cook had overlooked when cleaning the clams. The emperor, apparently in great pain, asked the American Minister to Korea, Horace N. Allen, for advice. Allen suggested Dr. Souers, an American dentist based in Tokyo who happened to be in Seoul administering to the dental needs of the Western community. Dr. Souer promptly appeared at the palace and fixed the suffering monarch's tooth thus saving the imperial kitchen and its careless staff from the emperor's wrath.

"Did You Know? Tooth and stone"
by HanCinema is licensed under a Creative Commons Attribution-Share Alike 3.0 Unported License.
Based on a work from this source