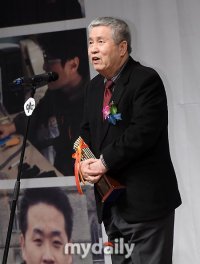 Master director Im Kwon-taek may have 100 films under his belt, but he considers his upcoming project, "Dalbit Gireo Oligi" ("Hanji"), his "debut piece".

"I hope this will be called my first ― rather than 101st ― film, a debut piece that breaks away from the framework of the 100 Im Kwon-taek-marked films I've made in the past", the 75-year-old cineaste told a crowded press room in Seoul, Tuesday, ahead of the shooting that begins next month.

He even "broke up" with his old working partner, cinematographer Jung Il-sung, in order to venture into the world of digital cinema for the first time. Two years ago at the opening reception of the 1st Cinema Digital Seoul film festival (CinDi), he had said it was a genre that he "must learn".

"I just decided to run headlong into it", he said, "I wanted to contradict expectations and work with something new and contemporary, and I hope to project myself into the medium while learning its advantages". He will work with Hwang Gi-seok, a young cinematographer who is experienced in digital films. "But he's young, so I'm worried about whether he will understand my jokes".

Some things, however, will remain strictly "Im Kwon-taek".

A cast of bona fide actors will present a theme that is at once quintessentially Korean and universally human: actors Kang Soo-yeon and Park Joong-hoon come together for a story about people who dedicate their lives to the art of making hanji, or traditional Korean paper.

"As you know I've captured onscreen aspects of Korean life, history and culture. I was determined to continue that for the rest of my life, to present things like `pansori' (Korean opera) in films with both universal and uniquely Korean sensibilities", said the director.

Min Byung-lock, festival director of the Jeonju International Film Festival (JIFF), suggested a movie about hanji over a glass over soju, and Im agreed without a moment's hesitation. JIFF is known for producing movies, including an annual digital omnibus project.

"But the world of hanji is so extensive and profound that I had a lot of trouble fathoming it, and felt I got tricked into doing this", he said about toiling over the scenario for the past two years. "The process was painful but it was a greatly rewarding learning experience".

A Korean proverb says that silk lasts 500 years while hanji endures for 1,000. The poetically symbolic title refers to the process of making the paper, which includes submerging ingredients in moonlit water.

The Cannes Film Festival has already expressed interest in the film, said Min. In 2002, Im won the Best Director award at the event for "Chihwaseon".

Park stars as a middling civil servant who applies for a hanji-related project in hopes of a promotion but becomes obsessed with the beauty of hanji. Kang plays the role of a documentary filmmaker who meets him while working on a story about the traditional art.

Like the film's modern digital medium, the story itself will be modern ― "It's from a modern perspective, and is about something very human, like director Im's other films, rather than being just about something traditional", said Park.

The script, however, has yet to be completed and "probably won't be until the shooting is over", as has been the case with his other projects, chuckled Im.

The project is also special in that Im is reuniting after 20 years with Kang, who won the Best Actress award at the Venice Film Festival for "Sibaji" ("The Surrogate Woman", 1987). He drew laughter as he continued to refer to the now middle-aged actress as "little Miss".

"I actually felt a lot of pressure. I worked with the director twice and both films garnered much success and praise and really mapped out my life as an actress. But I will try my best, as if it's my debut piece", said Kang.

Park, on the other hand, was an actor Im had always wanted to work with ― "I was afraid I wouldn't be able to meet him in my lifetime", said the director. Park and Kang, both 43, are coming together for the first time in some 20 years, since "Springtime of Mimi and Cheol-su" (1987).

Shooting for the 2-billion-won project begins in January 2010, as "the icy water during wintertime is considered to be the best for making hanji" explained Im. If all goes according to plan the movie will premiere as the opening film for JIFF in April, said JIFF organizers, and possibly be introduced at Cannes in May.