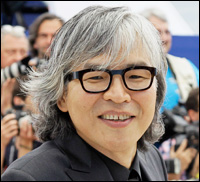 The Cannes Film Festival appears to be particularly cruel for one Korean director. Perhaps Im Sang-soo's tirade for his failure to win means a gap the Korean film industry has to fill to be a producer of movies that truly live up to global standards.

Before and after the closing ceremony, Lim, who directed, "The Taste of Money", said to various Korean media that his failure to win was a personal "tragedy" and his participation a mistake because he was telling a "very Korean story" that foreigners can't understand.

"Only ordinary people living Korean can understand (his film)", he was quoted as saying.

It was unexpected from the director who has had two consecutive invitations to the French Riviera ― last year he was there with a remake of the 1960 Kim Ki-young masterpiece "The Housemaid - 1960".

Another director and Cannes regular Hong Sang-soo, who kept noticeably silent after presenting "In Another Country", came as little relief from Im's sore-loser behavior.

Being at a loss for an explanation, Im continued to create new conspiracies. In the Korean interview, he even cited one of his responses to the press ― that his next work will be a harsh critique of Caucasians ― as the reason behind his empty-handed return home from the West.

He alleged that Thierry Fremaux, the head of the festival, had given him the cold shoulder during a dinner, which was apparently a surefire sign of his impending "tragedy".

His entry received the lowest mark out of the 22 works in competition for Screen International, which aggregates reviews of the most respected critics worldwide. As much as Im insists on his work's realism, The Taste of Money gives no new insight, something virtually every reviewer mentioned.

It is supposedly a voyeuristic look into the salacious private lives of the super-rich, but it is instead a tacky fantasy. It panders to the baser senses; it is nearly pornographic.

Im implies that the "ordinary people" he speaks of should watch it and find gross satisfaction in the unhappiness of those classed above them.

It is a surreal, albeit visually striking, attack on the creme de la creme with unbearably unnatural dialogue between these "real" characters.

Variety wrote in its review, "Even with such heady ingredients as sex, power and murder, there's little flavor to 'The Taste of Money', a trite and tangled potboiler". The article further referred to it as a "glorified domestic drama with classier couture and shapelier champagne flutes".

Im said that he has "contempt for Asian movies that are always invited to European festivals and meet the expectations of the West", so he should no longer participate.