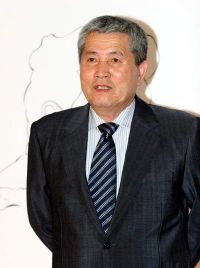 Im declared, with a note of guilt, that everyone in the Korean film industry -- including himself -- should be blamed for the falling market share of Korean films. "Movie fans have grown disappointed with Korean films because those working in the industry have just tried to jump on the bandwagon of the industry's boom without careful preparation", he said bitterly. "Even I made movies recklessly, too, producing 50 works within a period of 10 years".

But the Korean director still has hope and expectations for younger filmmakers. "Because I believe that Korean movie makers are highly qualified and able, the difficulties we are facing now can be overcome if we devote ourselves to making quality movies", he said. Im singled out his own experiences to illuminate his point. He had wanted to produce his 1993 film "Seopyeonje" since the novel of the same name by Lee Cheong-joon was published in 1978. But he had to wait for over 10 years until he found the right actor (Kim Myung-gon) and actress (Oh Jung-hae) for the characters. Then he faced another obstacle -- the production company opposed the project, doubting it would succeed at the box office.

"I did everything I could to persuade the production company because it was the kind of work I wanted to make all my life", he recalled. "Fortunately people loved the movie. It was all thanks to moviegoers that a film like 'Seopyeonje' was able to succeed despite its weaknesses".