Director Is Back, Milder 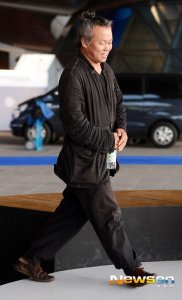 Famous filmmaker Kim Ki-duk is back with a new film. And he is visibly a lot milder.

Kim was at the center of attention last year after his harsh remarks and ensuing apologies about the film industry in Korea touched off controversy when he released his 13th film. He threatened not to make a film if it would not attract over 200,000 moviegoers and criticized the popularity of the mega-hit film "The Host".

"There has not been much change since last year. But I just wanted to erase all those bad memories and keep working with those who have supported me", Kim said Friday during a news conference at Sponge House theater in Chongno, downtown Seoul, after the preview screening of his new film "Breath".

The director, who is often regarded as a maverick in the local film scene, showed up Friday without wearing sunglasses as he did last year. Instead, he wore a mild smile on his face, and answered all questions from reporters sincerely and sometimes humorously.

"We learn a philosophy of irony in our life _ darkness becomes brightness and brightness becomes darkness. Last year was the time when I learned it", he said.

The philosophy of irony can be Kim's career itself. Although he has become an acclaimed filmmaker on the international festival circuit, winning awards at international film festivals and drawing moderate commercial success overseas, most of his films were commercial flops in his own country.

His bitter experiences at home led him to think that he had failed to communicate with local audiences through his films, resulting in the critical remarks.

"My remarks were not just over a wish for commercial success. It was more of a desire to see diversity in local films at a time when just one film ("The Host") drew more than 100 billion won in box office sales", he said.

His new film, "Breath", is a story of a woman who meets a man sentenced to death in a prison. Through the odd relationship with the criminal, she is able to heal her inner pain from her husband who indulges in a love affair with another woman.

The film stars Taiwanese actor Chang Chen and local actor Ha Jung-woo. Kim even takes a small role in the film _ as a prison officer.

"The film is quite accidental from beginning to end. But casting myself for the role was not an accident. The decision was made by our directing staff", Kim said half-jokingly.

It is the second time that he has appeared in one of his films _ the first being in the 2003 drama "Spring, Summer, Fall, Winter... And Spring" where he played the main character's adult role in the last 20 minutes of the film.

Apart from acting, Kim found it difficult to complete the new film because of its tight production budget of 370 million won.

"I don't expect the film to attract a large audience. I think slashing budgets is the only way the Korean film industry can survive", Kim said.

Regarding his future, he said he has still has many stories he wants to unfold on screen.

"I'm confident as a low-budget film director. Now I'm happy without wanting anything more. But, in my mind, I still have some 10 more stories to tell. I'll do my best with those who have supported me", Kim said.