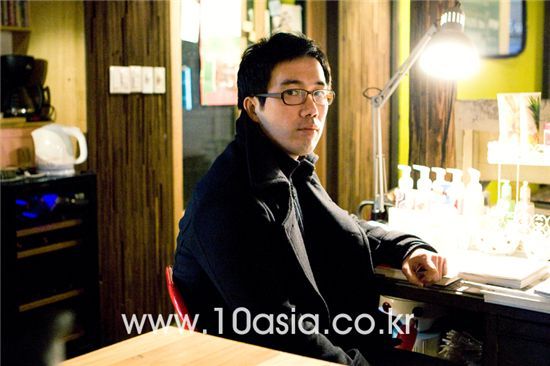 There are two men. Whether they have their backs turned or are facing each other, they are enemies. They stand together only because they need to, and the distance between them fails to narrow. Gang-pae (played by So Ji-sub) and Soo-ta (Kang Ji-hwan) met in "Rough Cut" to shoot a film and Han-gyu (Song Kang-ho) and Ji-won (Gang Dong-won) meet in "Secret Reunion" to find what they have lost. Yet while Gang-pae and Soo-ta end up scarring each other deeply, Han-gyu and Ji-won find peace.

The man who made these men meet, made them fight and then reconcile, is director Jang Hoon. He has returned with his second directorial feature "Secret Reunion", again telling the story of two male characters as he did with "Rough Cut" but things are different this time. "In "Rough Cut", there were no moments the two characters understood each other. They only see themselves through the other. But the two men in "Secret Reunion" find a point of understanding. They're more humane".

Jang Hoon said he "did not know what movies were about in the beginning" and "simply did it for the enjoyment of working for a singular goal with good people". Yet the expectation the audience has for the stories he has to tell, is inversely proportional to his short filmography. Jang Hoon, who believes the story is the most important element to a film, recommended films which contain special stories he became fascinated with.

1. The Sixth Sense
1999 | M. Night Shyamalan
"I really like M. Night Shyamalan and his work, from 'The Sixth Sense' to 'Unbreakable'. I had been aware of the twist to the ending of 'The Sixth Sense' even before I watched it but I still enjoyed it a lot. I was really into thrillers at the time, especially ones with twists, so that's what most of my scenarios were like for quite some time. (laugh) But as I wrote and watched more, I realized that there doesn't have to be a twist... that it's possible to tell a lot of good stories without them. That's when I started looking outside thrillers".

Unarguably, "The Sixth Sense" is the epitome of films with twists. But even the viewer who is aware beforehand of the secret behind the identity of Dr. Malcom Crowe, played by Bruce Willis, will be able to enjoy this thriller to the fullest. Director M. Night Shyamalan does well in cooking up the cliches found in horror flicks to create scenes of his own and he makes the audience shudder by simply showing the white steam that comes out from the boy's mouth at the climax of the movie.

2. "Let the Right One In"
2008 | Tomas Alfredson
"'Let the Right One In", along with "No Country for Old Men" were the two films I enjoyed watching the most last year. "Let the Right One In" was just wow... a very sad and beautiful story. Some people said it was scary because there were some slightly brutal scenes but I rather think it's a very special fairy tale. I watch a lot of romantic films too but I think I'm suited better for this genre opposed to romantic comedies. Although they don't have to be quite so tragic. (laugh)"

So would the girl and boy have lived happily ever after? The boy was still too meek to leave everything behind in pursuit of love. The world is too rough of a place for the boy who is as pure as the snow, to protect the vampire girl. That is why the sight of the two taking off together in the ending makes the viewer more sad -- one can easily predict that they will experience yet another tragedy rather. Child actors Kare Hedebrant and Lina Leandersson, also played out their roles superbly in temperatures of minus 30 degrees.

3. "Plein Soleil"
1960 | Rene Clement
"Amongst films starring two men, this was the one I enjoyed watching the most. I took much of what I felt from this film into consideration when shooting "Rough Cut". I still remember the scene where Alain Delon looks at the mirror while wearing his friend Philippe's clothes when it turns out that Philippe was watching him from behind. The look in Maurice Ronet's eyes and the sight of Alain Delon! I think Delon doesn't receive enough credit for his acting because of his good looks. I tried my best not to make Gang Dong-won look great in "Secret Reunion" but I realized there was only so much I could do. It's not like I could put a mask on him. (laugh)"

Tom Ripley, played by Delon, wants everything of wealthy richman's son Philippe, played by Ronet. His money, status, elegant taste and even his woman. Ripley ends up killing Philippe and seizes everything which was his, but fails to become Philippe himself. The reason why we cannot help but sympathize with the cruel Ripley is not because of his dashing looks but because he may be a reflection of us who too, desire for much but cannot always be granted it all.

4. "Elvira Madigan"
1967 | Bo Widerberg
"This is an extremely sad melodrama. The love between these lovers does not falter despite how poor they are in reality. Rather, the scene where they pick raspberries from the forest because they have nothing to eat or them carrying wine and bread in a picnic basket to enjoy out in the field was beautiful. They make an extreme decision in the end but that in itself too was very romantic. The things they go through because of their poverty all seemed very realistic yet also beautiful too. This is the romantic movie that has left the strongest impression on me".

A lieutenant from a noble family and a tightrope walker. The two, in love despite their difference of status, leave everything behind and flee together -- their family, popularity, everything for their love. The film is based on a real story yet also so unlikely to happen that it was produced into a film. The couple in "Elvira Madigan" truly risk their all to perfect their love.

5. "The Mission"
1986 | Roland Joffé
"I also like religious films like "The Mission". It's with films by director Kim Ki-duk or other great filmmakers that I sometimes get the feeling that I'm transcending reality. Such emotions are what turns that moment you are watching the movie into something special. Those moments will come at different points depending on the movie but I think there's a great appeal to experiencing the moment where you transcend religion".

In 1750, where religion was the sole truth, Guarani Indians lived on the border of Argentina, Paraguay and Brazil. Without doubt, the guardians of Western christianity would seek to enlighten them yet their arrogance leads to the destruction of the land of the Guarani. The 29th Cannes Film Festival responded to the film's grave questioning of religion and belief with a Grand Prix.

"Director Jang Hoon's Movie Picks"
by HanCinema is licensed under a Creative Commons Attribution-Share Alike 3.0 Unported License.
Based on a work from this source