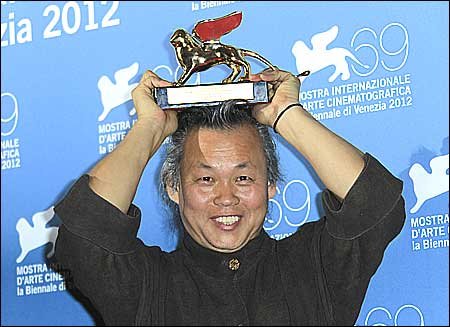 Director Kim Ki-duk shows the Golden Lion he won for his movie "Pieta" at the 69th Venice Film Festival in Italy, Saturday. Kim's bleak-morality tale became the first Korean film to win the top prize at one of the three major international film festivals. He surprised the audience at the awards ceremony by singing the traditional Korean folk song "Arirang" on stage to thank the jury. AP-Yonhap

Kim's bleak-morality tale became the first Korean film to win the top prize at one of the three major international film festivals - Venice, Cannes and Berlin.

"To be honest, I had some expectation because the response from the critics and the viewers were to the point that even I could feel it", said the director in an email interview.

Kim surprised the audience at the awards ceremony by singing the traditional Korean folk song "ARIRANG - Movie" on stage to thank the jury who handed the 51-year-old the Golden Lion.

"I would like to give infinite thanks to the actors and the crew who've participated in this film. And I would like to dedicate this glory to all of you who chose "Pieta" here", Kim said.

Actress Jo Min-soo, who was on stage with the director, shed tears of joy at the achievement.

Kim's film tells the story of a diabolical enforcer for a loan shark who prowls the alleys and clapped-out workshops of a Seoul district being redeveloped.

"The film starts out with violence and cruelty but cleans the mind with forgiveness and salvation toward the end, and I think this is what moved people's hearts", he added.

A mysterious woman claiming to be his mother walks into the life of the twisted hero who then struggles for redemption in an emotional crescendo.

Kim said that his film was intended to be a denunciation of "extreme capitalism". The enforcer in the film is played with skin-crawling intensity by Lee Jung-jin and the woman is a haunting presence played by Jo.

The film's title was inspired by Michelangelo's famous Pieta statue in the Vatican of the Virgin Mary holding the corpse of her son Jesus Christ.

"I've been to the Vatican twice to admire this masterpiece by Michelangelo. The image of this embrace has stayed with me for many years. For me, it is an embrace of humanity", the director said in an earlier interview.

Kim is no stranger to the Venice film festival. "Pieta" is his fourth film to have been invited to Venice. His previous works shown on the Lido were "The Isle" (2000), "Address Unknown" (2001) and "Bin-jip" ("3-Iron") in 2004. The movie "3-Iron", a film about the relationship between a young drifter and an abused housewife won the Silver Lion, the best director award eight years ago.

Hollywood producer and director Michael Mann, who presided over this year's jury, paid tribute to all 18 films in competition. But "Pieta" in particular "seduced you viscerally", he said.

South Korean film made its global debut when director Kang Dae-jin's "Mabu" won the Silver Bear award at the 1961 Berlin International Film Festival. In the past 50 years the local film industry has been receiving notice for its distinct creations and world class performers, with many awards being won from the late 1980s onwards.

The best actress award went to Israeli actress Hadas Yaron for her role in Rama Burshtein's "Fill the Void".

"Pieta", which has an 18-and-over rating, is currently playing in theaters nationwide.