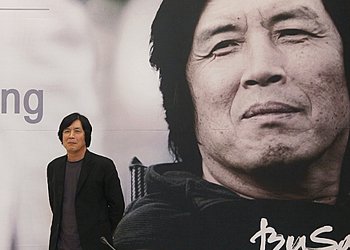 Director Lee Chang-dong will start shooting his new film "Burning" next month, about 7 years after his last film "Poetry" which won Best Screenplay at the Cannes Film Festival in 2010.

"Shooting a film always accompanies various issues, so I'm not sure exactly when we will start. But if things run smoothly, I expect to start shooting in November", said Lee who participated along with well-known Asian directors in a special session Wednesday to talk about Asian films as part of an event of this year's Busan International Film Festival which is underway in the port city.

The film is a mystery thriller revolving around a woman whose life is intertwined with two men -– one rich and the other who struggles to make ends meet. Industry sources believe popular stars Gang Dong-won and Yoo Ah-in were casted for the film.

"Director Lee Chang-dong to Start Shooting New Film Next Month"
by HanCinema is licensed under a Creative Commons Attribution-Share Alike 3.0 Unported License.
Based on a work from this source