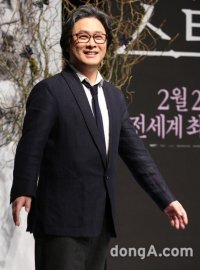 Acclaimed director Park Chan-wook has chosen Kim Ok-vin as the star of his next film, "Evil Live".
The spotlight had been on just who the female star would be as the part involves many adult scenes alongside male heart throb Song Kang-ho who claimed the main role in Park's most recent film, "The Host".
"Evil Live" or "Bakjwi" in Korean is a melo-horror film of a human-turned-vampire's affair with a married woman.
Director Park, known for his award-winning film "Old Boy" and "Sympathy for Lady Vengeance", says he chose Kim for her unique talents that allow her to assume a vast range of characters.
Shooting will begin in March.

Video by following the link below

"Director Park Chan-wook Chooses Heroine for Steamy Vampire"
by HanCinema is licensed under a Creative Commons Attribution-Share Alike 3.0 Unported License.
Based on a work from this source