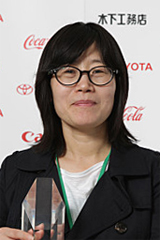 Shin Su-won emerged as the only one of five Korean film directors to win an award at this year's Cannes Film Festival. She collected the Canal+ Prize for best short film for "Circle Line", which tells the story of a middle-aged man killing time on a Seoul subway train as he tries to keep from his family the fact that he was recently made redundant.

Shin, who studied German at Seoul National University, worked as a middle school teacher for some 10 years from 1990 in Seoul. But the School of Film, TV & Multimedia at Korea National University of Arts completely changed her life. At the age of 34, she told her husband and children that she needed a change of direction, quit her job and enrolled.

Shin will start filming her next project, "Pluto", soon. The movie sets out to critically examine a highly competitive society by following a group of students at an elite high school.