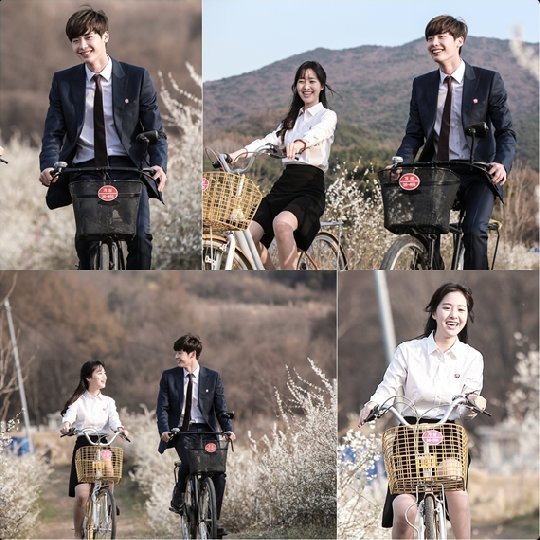 Actor Lee Jong-suk and Jin Se-yeon enjoyed a date together by riding on their bicycles.

They play the roles of Park Hoon and Song Jae-hee, his first love in the new SBS drama "Doctor Stranger".

The two of them are riding along the flowery street with a tag on one of their bikes saying, "Characteristic".

This picture was taken on the 31st of last month at Choong-cheong Bukdo. Despite rocky road conditions, they enjoyed filming this scene together.

The two of them made eye contact during the ride and smiled at each other.

The production team says, "The two of them meet like fate when they are young and fall in love naturally. The actor and actress did their best and the scene was a wrap in just one cut".

Meanwhile, "Doctor Stranger" is a medical drama about a North Korean doctor Park Hoon (Lee Jong-suk) who was born in the south and Han Jae-joon (Park Hae-jin) an elite doctor, fighting against a complication. To be aired on the 28th after "God's Gift - 14 Days".

""Doctor Stranger" Lee Jong-suk and Jin Seo-yeon"
by HanCinema is licensed under a Creative Commons Attribution-Share Alike 3.0 Unported License.
Based on a work from this source