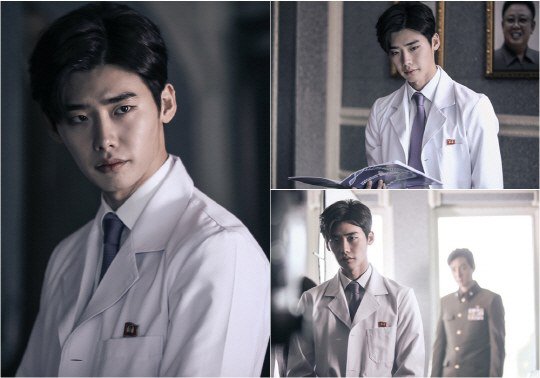 Leading star Lee Jong-suk in the new SBS drama "Doctor Stranger" takes on the role of a genius doctor named Park Hoon. Park Hoon is a character who analyzed the health of wealthy North Koreans and is known to be the best surgeon known yet. He has the passion of making money in all means possible to find his first love within the whirlpool of fate.

Pictures of Lee Jong-suk show him dressed up as Park Hoon. He is wearing a white doctor's gown and is looking directly at something with an air of intensity. Everything about the background hints that he's from North Korea especially the portrait of Kim Jung-eun in the back.

Lee Jong-suk has taken surgical and other practical lessons to be the perfect Park Hoon and studied his script from front to back to be able to say the difficult technical terms easily.

"Doctor Stranger" is a medical investigative drama about genius doctor Park Hoon from the North and elite doctor Han Jae-joon (Park Hae-jin), struggling to fight against a great complication. Other casts include, Kang So-ra and Jin Se-yeon.

""Doctor Stranger" Lee Jong-suk, taking lessons"
by HanCinema is licensed under a Creative Commons Attribution-Share Alike 3.0 Unported License.
Based on a work from this source