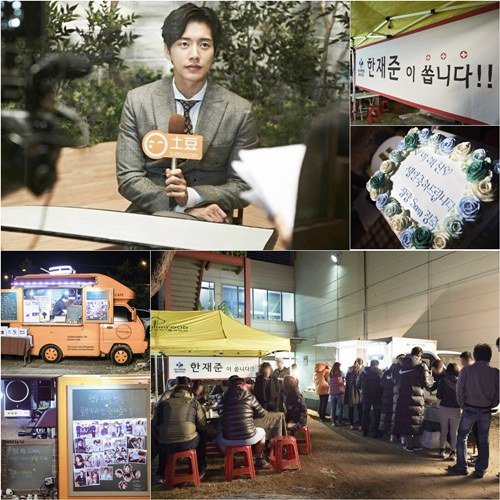 Park Hae-jin presented the drama set with a dinner truck and coffee.

Following the dinner was a surprise birthday party. During dinner, a cake by Park Hae-jin's best friend and Chinese top model Jang Yang was brought to the set and naturally, a song. Everyone blessed his birthday and felt the teamwork.

Park's co-star, Lee Jong-suk, added greatness to the festivities by celebrating with him. There was a scheduled interview with the Chinese media and they gave him a present which was light for his face and a reflection plate to make him look brighter.

Everyone celebrated his birthday like family and they are usually so considerate and caring for each other. The production says the story will now take place in Korea and more exciting stories are to be broadcasted on the third episode of the drama on the 12th.

""Doctor Stranger" Park Hae-jin's birthday party on set"
by HanCinema is licensed under a Creative Commons Attribution-Share Alike 3.0 Unported License.
Based on a work from this source