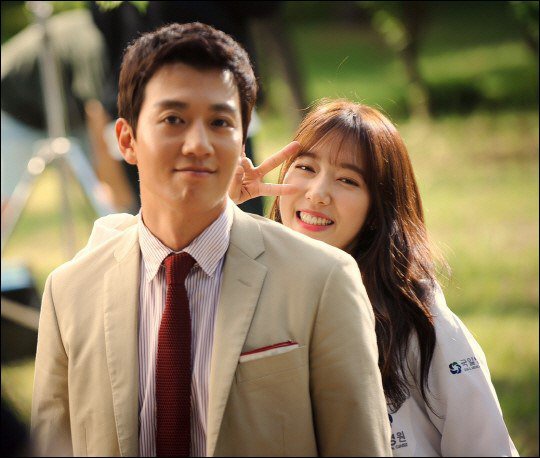 "Dcotors" Kim Rae-won and Park Shin-hye are smiling in the picture.

The teaser for the SBS drama "Doctors" was filmed on the 28th. Kim Rae-won appeared in a light brown suit with a maroon tie and white shoes. Park Shin-hye appeared in jeans, a blouse and a doctor's gown. They play Ji-hong and Hye-jeong.

Kim Rae-won and Park Shin-hye left no room for awkwardness although it was their first time working together.

Park Shin-hye played a part in making Kim Rae-won smile throughout the shoot and she said, "It's been a while since I've been on set, but it's good to be with old people once again".

The teaser for "Doctors" will be released this 30th.

"Doctors" is about Park Shin-hye who goes from being a delinquent to a doctor and Kim Rae-won who fights for justice meeting as doctors and falling in love with each other.

The first episode of "Doctors" will premiere on the 20th of June.

""Doctors" Kim Rae-won and Park Shin-hye at teaser filming"
by HanCinema is licensed under a Creative Commons Attribution-Share Alike 3.0 Unported License.
Based on a work from this source