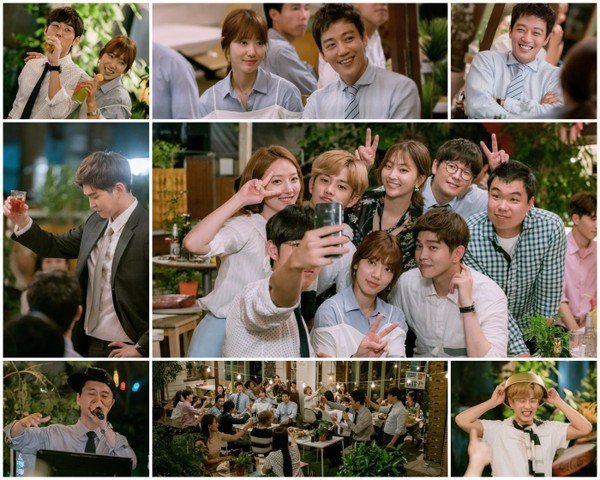 Behind-the-scenes cuts were released stills from the eighth episode of the SBS drama "Doctors".

The members of Gook-il Hospital are enjoying a dinner party together.

Lee Yeong-gook (Baek Sung-hyun) sent pictures to Jin Seo-woo (Lee Sung-kyung) via cell phone. Viewers of the drama wanted to see the pictures in real size. All the doctors and nurses are smiling brightly having a good time. Hong Ji-hong (Kim Rae-won) is full of charm and was the source of entertainment on this night.

Jeong Yoon-do (Yoon Kyun-sang) can be seen drinking from a glass, Kim Tae-ho (Jang Hyun-sung) is putting out his rap skills with a cap on backwards, and Choi Kang-soo (Kim Min-suk) is wearing a bowl on his head.

The dinner party was filmed like it was the real thing and the cast wasn't even tired from the long take.

Sources say the cast are always together for a number of times so they have become close and friendly as well as dependant on each other.

Meanwhile, "Doctors" is a story of Yoo Hye-jeong (Park Shin-hye) and Hong Ji-hong (Kim Rae-won) reuniting as doctors and experiencing a love they have never experienced before.

""Doctors" Kim Rae-won, Park Shin-hye and Yoon Kyun-sang at dinner party "
by HanCinema is licensed under a Creative Commons Attribution-Share Alike 3.0 Unported License.
Based on a work from this source