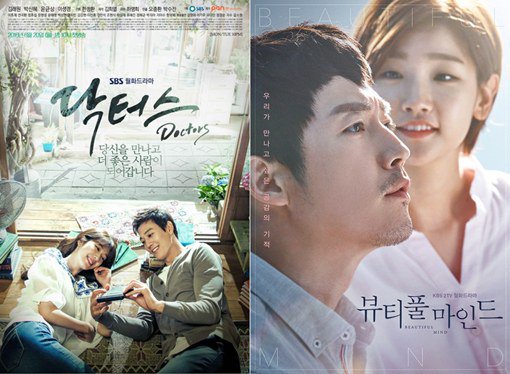 Two similar dramas are competing with each other and will they put life into Mondays and Tuesdays?

Both are medical dramas and they take place in hospitals. Even the neurosurgical scenes viewed through microscopes are alike. The actors of these dramas have been getting tips from medical experts to get used to the professional terms and they've had thorough script readings. However, even within the same field, they have different genres. "Doctors" is mostly mellow while "Beautiful Mind" is mostly mystery and investigative. It has more medical professionalism too.

The thoughts of the directors are different too. Director Oh Choong-hwan from "Doctors" says, "Here we can see how a person changes when he or she is sick" and director Mo Wan-il from "Beautiful Mind" says, "No one thinks of what a kind of a person a doctor might be, but this drama will get you thinking about it".

Both dramas have tossed Park Shin-hye and Park So-dam as their winning moves. The young actresses with skills attempt at something different this time. Park Shin-hye turns wilder this time. She then matures as the episode goes on. Park So-dam is more down-to-earth and realistic this time.

Oh Choong-hwan said, "Park Shin-hye is the first actress I worked harder for to make her be more successful". Mo Wan-il said, "I can't think of anyone else who is so perfect for this role. It was hard to think of anyone else and I was going to wait till the very day before broadcasting for her".

Both directors say the dramas are burgeoning as Park Shin-hye meets Kim Rae-won and Jang Hyuk improves as a person himself.

""Doctors" or "Beautiful Mind"? Mellow or mystery?"
by HanCinema is licensed under a Creative Commons Attribution-Share Alike 3.0 Unported License.
Based on a work from this source