Does Jang Keun-suk have the forever weapon? 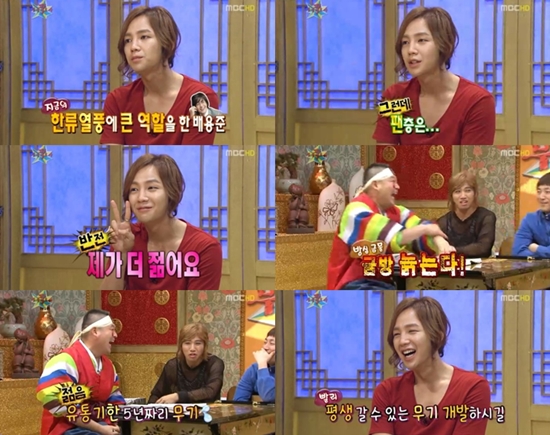 Jang Keun-suk spoke about his dreams and future in the MBC TV program "Mureupak Dosa".

Jang Keun-suk mentioned in the first part of his appearance that his better point compared to Rain was 'youth' and on the second part, 'young fans' when asked about Bae Yong-joon.

Arrogant Yoo Se-joon said, "Youth only lasts about 5 years or maybe 4. You need something you can have forever". For a short while, his words were full of truth. Then, does Jang Keun-suk have the 'weapon' that he needs forever?

Jang Keun-suk has experience of 20 years. He was a model chosen from a beauty kid contest and has been building on his base since then. That is something that can't be bought with money.

He also has fans all over the world such as China, South East Asia and others. Fans love 'him' for who he is. They are what makes him a star.

Another thing, he has acting. He is very playful and easy going in this program. He sometimes shows very funny pictures of himself through Twitter as well. However, he is always serious in his projects. He has played well the part of a serial killer suspect in the movie "The Case of Itaewon Homicide" and an idol singer in the drama "You Are Beautiful".

"Does Jang Keun-suk have the forever weapon?"
by HanCinema is licensed under a Creative Commons Attribution-Share Alike 3.0 Unported License.
Based on a work from this source