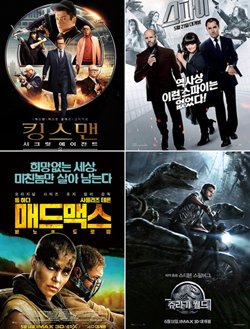 Korean films have been struggling to attract moviegoers this year in their worst season ever.

According to the Korean Film Council on Thursday, only 40.7 percent, or 35.46 million cinemagoers saw a Korean film this year, a record low since statistics began in 2004. Foreign films attracted 51.64 million spectators over the same period.

"In past years, several Korean films attracted more than 10 million spectators, but no others have been as successful", said an industry insider. "Recent Korean films failed to live up to increasing expectations, and as a result more people are turning to foreign films".

"Domestic Film Attendance at All-Time Low"
by HanCinema is licensed under a Creative Commons Attribution-Share Alike 3.0 Unported License.
Based on a work from this source