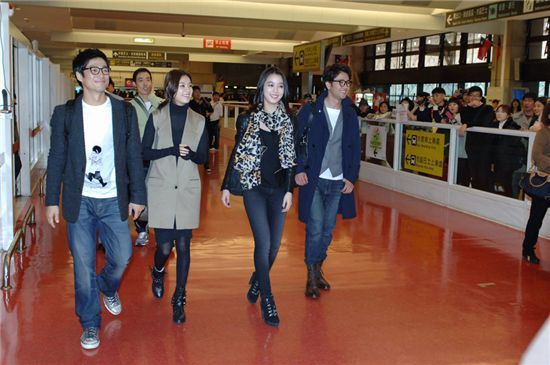 Their agencies announced on Wednesday that the three stars were in Taiwan from November 14 to 16 to attend a promotional event hosted by Taiwan's GTV for MBC's historical epic "Dong Yi", which began its run in the prime time slot of GTV starting November 15.

After flying into the country on Saturday, Ji, Han and Bae met with about 1,000 fans the following day to speak about "Dong Yi".

At the event, Ji, who last visited Taiwan six years ago for "Dae Jang Geum", took pictures with the local fans with his own camera, Han played the haegeum [a two-stringed Korean traditional fiddle] which she had received from as gift, while Bae showed off his swordsmanship just like his character in the show.

The next day, the three stars were interviewed by numerous local medias including UDN.com, China Times, NEXT TV, MTV and Channel V and appeared on variety programs to promote their show.

"Dong Yi" is about a woman named Dong Yi who grows up to become Choi Suk-bin, a consort of King Sukjong and the mother of King Youngjo during the Joseon Dynasty.

The show had dominated Korea's TV ratings charts for Monday and Tuesday evenings, taking the No. 1 spot during its time slot for several weeks.

The 60-part series has also been sold to ten countries including Hong Kong, Indonesia, Japan, the Philippines, Taiwan, Thailand and Vietnam. 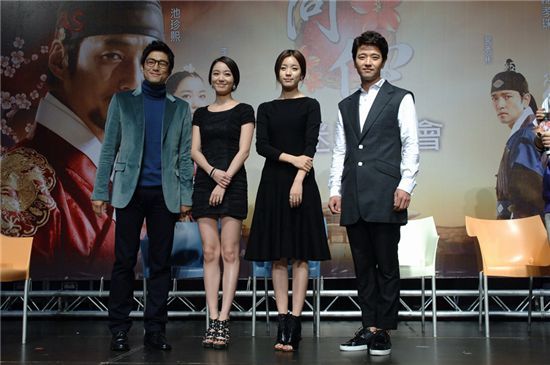 ""Dong Yi" main cast promotes series in Taiwan "
by HanCinema is licensed under a Creative Commons Attribution-Share Alike 3.0 Unported License.
Based on a work from this source