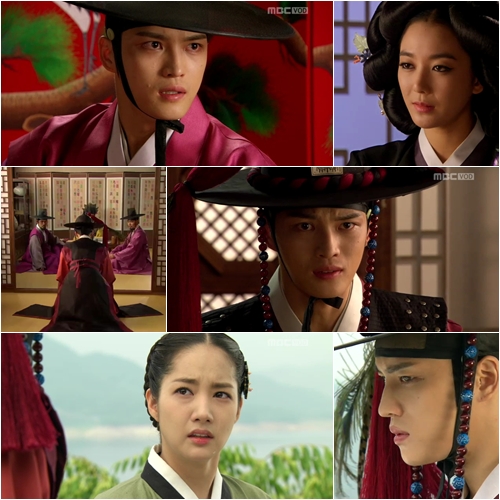 There is an actor who rings the heart with his eyes rather than his lines. Someone who is the bad guy but can't be disliked and is always thought about. That is Kim Jae-joong who takes on the role of Kim Kyeong-tak from the MBC weekend drama "Dr. JIN".

Kim Kyeong-tak is elite with outstanding martial arts skills and education but is insulted for the reason that he is the offspring of a concubine. He has to call his father 'my Lord', endure the insults he gets from his half-brother and never says no to what his father tells him to do even if it's something bad in fear of being abandoned.

Not only that, he is at risk of losing his one and only love Yeong-rae (Park Min-young) to Jin-Hyeok (Song Seung-heon) but he pretends to be strong while hiding his pain deep within.

Through the line, "The heavens was never on my side" we can see his sorrows, sense of loyalty towards his father and obsession with Yeong-rae. His bad deeds are not real but a choice to earn the hearts of other people. This is why he looks so sad even when he is pointing a knife at Jin-Hyeok and setting fire to a wooden village with poison in his eyes.

Synchronizing 100% with Kim Kyeong-tak, Kim Jae-joong is being reviewed highly for his repeated expression of sincerity of a warrior and the true emotions in his heart.

Although he lost Yeong-rae in the drama, he's won over the hearts of other female viewers with his innocent heart of love. Netizens say, "Why isn't there anyone on Kyeong-tak's side?", "I feel pity for his affection-craving", "Time slip him to the 21st century" and more.

Meanwhile, "Dr. JIN" which is based on a Japanese original, is about a doctor named Jin Hyeok who travels back through the 1860s and struggles as a doctor.

""Dr. JIN" Kim Jae-joong, why his spiteful eyes look sad"
by HanCinema is licensed under a Creative Commons Attribution-Share Alike 3.0 Unported License.
Based on a work from this source