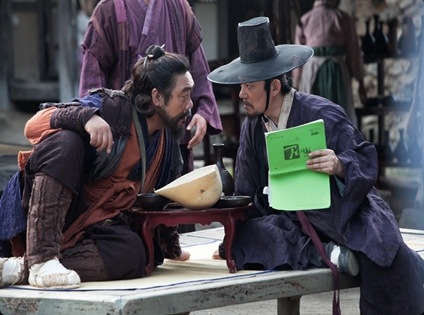 Actor Lee Beom-soo has an unusual love for props.

Pictures of Lee Beom-soo taking on the role of Lee Ha-eung in the MBC weekend drama "Dr. JIN" were revealed.

In the pictures, Lee is holding a fan with his name written on it. He is also practicing lines with actor Lee Won-jong in another. In his hand is the script booklet with the name Heung-seon Army.

"Dr. JIN" is a drama that takes place during the time of the Kim's of Andong. Lee Beom-soo's role is Lee Ha-eung, a real character who was called the 'man of fortune' during the Chosun times.

Meanwhile, on the sixth episode of "Dr. JIN", Jin Hyeok struggled to save Gye-hyang (Yoon Joo-hee), a gisaeng who loved Lee Ha-eung once and was in the same gisaeng house with Chun-hong (Lee So-yeon).

""Dr. JIN" Lee Beom-soo's love for props"
by HanCinema is licensed under a Creative Commons Attribution-Share Alike 3.0 Unported License.
Based on a work from this source