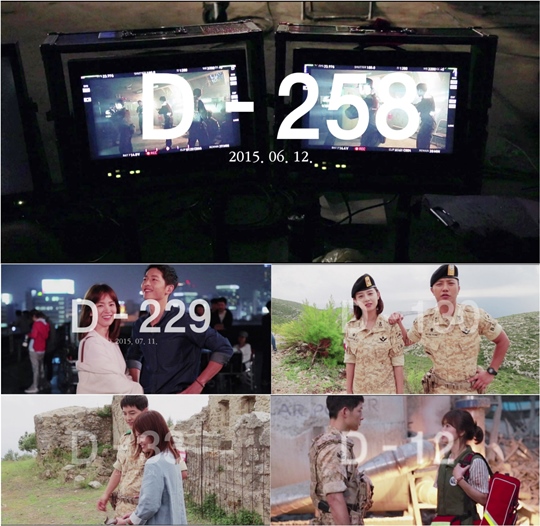 'Descendants of the Sun' making film, 'D-258' unveiled on February 12th is garnering much attention, while its first episode is about to go on air soon (www.kbs.co.kr/drama/sun).

KBS 2TV's new Wednesday & Thursday drama, 'Descendants of the Sun' is highly anticipated by drama fans as well as people inside broadcasting industry, because the drama is produced on a pre-filming basis by 100% and it will be broadcast simultaneously in Korea and China.

'D-258' means June 12th last year, which is 258 days ago from February 24th this year, its premier date. The first take was filmed 258 days ago from the scheduled premiere date. Filming all of the episodes is complete for the 6 months including the portion filmed abroad in Greece and they are working hard to wrap up the post-production before the premiere date.

As the figure '258' represents, the duration of the actual filming of the drama was extended in great deal. That said, 'Descendants of the Sun' is highly anticipated as to the enhanced level of completeness in terms of the quality.

The production team said, "We focused on details when filming.The drama includes some of the scenes, which could not have been possible unless it had been produced based on pre-filming system".

The humanist melodrama depicts the ally and romance among the soldiers and army doctors, who have been dispatched to an unfamiliar place called Uluk under the extreme circumstances.

'Descendants of the Sun' has been scheduled to begin at 10 PM on February 24th through KBS 2TV.

"Drama 'Descendants of the Sun' is a TV show at a movie-like scale"
by HanCinema is licensed under a Creative Commons Attribution-Share Alike 3.0 Unported License.
Based on a work from this source