Drama made to promote struggling singers 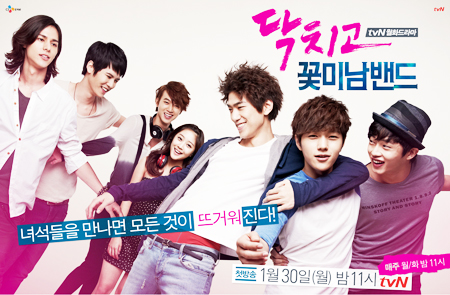 Acting is a serious endeavor that doesn't just come with good looks. It definitely isn't a default occupation for those who didn't make it as singers. Yet producers of "Shut Up: Flower Boy Band", a new drama on tvN about rebellious rock star wannabes, seem to think otherwise.

The 16-episode series that starts airing at 11 p.m. today tells the story of six middle school students who form a rock band called "Ahn-gu-jeong-wha", which translates to eye candy.

Above picture: Poster for "Shut Up: Flower Boy Band, " a new drama about rebellious rock 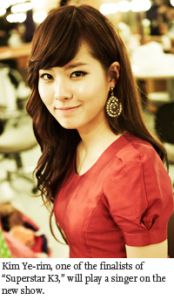 tried out for "Superstar K3", a survival audition show to become singers, but was excluded. He will start his actor training and career through the upcoming TV drama. (Courtesy of CJ E&M)

The show's director, Lee Kwon, said at a press conference in Cheongdam-dong in Seoul Wednesday that he wanted to portray the genuine rock spirit in the Korean music industry dominated by K-pop. Ironically, what he denounced as the making of "cultural products" by K-pop is the driving force of his series given the background of the cast. 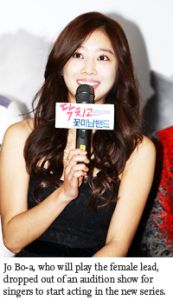 Kim Min-suk, who plays Seo Gyeong-jong, the ambitious keyboard player of the band, loosely participated in "Superstar K3", a survival audition show for singers on Mnet. He showed up at the preliminary regional audition in Daegu but never made it to the group of 11 contestants that actually competed in the show.

Kim told reporters Wednesday that luckily he signed an exclusive contract with CJ E&M, an entertainment giant that owns channels tvN and Mnet, as a singer shortly after he was excluded.

It is known that the firm provides six months of "incubation", a comprehensive care and training period, until the show's participants are picked up by K-pop agencies like SM or JYP. He was not able to recall other entertainers who also signed contracts with CJ E&M.

Kim was determined to impress the audience despite his lack of experience in the field. "You know how people say 'bal-yeon-gi' (a term Korean audience use to mock terrible acting) a lot; I really don't want people to use that term for me. I really don't want to be criticized for my acting".

The once aspiring singer has never received acting training. On this he said, "Director Lee Kwon said it was best for me to just learn on the set".

Kim is not the only one who will be receiving acting lessons through "Shut Up: Flower Boy Band". To play the heartbreaker in the series, Jo Bo-ahdropped out of "Made in U", an audition program to become a K-pop idol on JTBC, one of the controversial new comprehensive channels.

Appearing star-struck at the press conference, she said "I thought I had a lot to improve on in that field (singing), so I want to focus on acting for now".

Lim Kim, the lead vocalist of the duo Two Month who finished in the top three on "Superstar K3", will star in the new drama as well. Conveniently, she will play the role of a popular singer with the same name. Since "Superstar K3", Kim has been appearing on radio shows as well as spin-offs of the audition program such as "Superstar K3 Social Club" on Mnet where the 11 contestants continue to perform. A recently released photo shows Kim modeling for 1st Look, CJ E&M's fashion store.

Model-turned-actor Lee Min-ki who recently starred in the horror-romantic comedy "Spellbound" will make a special appearance in the first two episodes of "Shut Up: Flower Boy Band".

"Drama made to promote struggling singers"
by HanCinema is licensed under a Creative Commons Attribution-Share Alike 3.0 Unported License.
Based on a work from this source