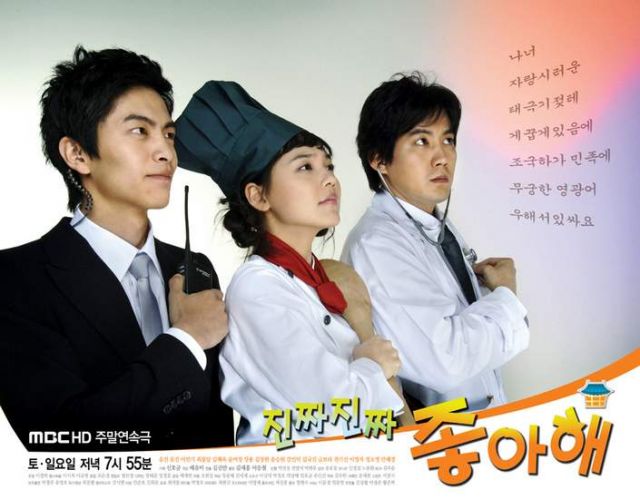 34 episodes - Sat, Sun 19:50
Synopsis
There's no 'nobody'. Everybody is once an important person to somebody.
The Life Story of Beautiful-minded People; 'The true meaning and hope of life can be learned from ordinary people'.
What makes Love Truly different from other stories is its characters; those who work in the Blue House (Korean presidential residence). This drama introduces the viewers the place considered mysterious and tabooed in TV dramas. It also features the people working inside the most unknown place in the country.

These people are working in the most unusual and interesting place in Korea. Nobody recognizes their hard work, but they strongly believe that the food they cook, the door they fix, and a phone call they answer can make a difference. They take their work very seriously and always do their best. The story features the simple, but noble spirit of those who love their job and work hard. Therefore, the Blue House in this story represents the workplace of the hardest working people in the country, rather than the secret and off-limits presidential residence.

She's a happy, fun-loving, honest and unpredictable person. She loves daydreaming. She's always thinking about something. She's such a bookworm. Her little room is filled with stacks of books. She loves eating. She recently realizes that she's a gifted cook. She used to live with her grandmother in the middle of nowhere. Since she was completely out of touch with the world, she seems like an alien to other people. She runs into problems at every corner in the bustling metropolis of Seoul. She gets carsick all the time. She speaks with a very thick Kang-won (East province of Korea) accent. For most people, it's almost impossible to understand exactly what she says. However, it's easy to like her. She's incredibly diligent. She's always on the move. She gets up at 4 in the morning as she used to do in her hometown. Her assiduity bothers Bong-ki who is extremely lazy. Soon she realizes that there isn't much to do in the city at 4 in the morning, so she takes a job delivering milk. Her neighbors have hard time understanding her. For them, her interest in other people's business seems unnecessary. They aren't used to getting help that they don't ask for. However, as time goes by, they start opening their hearts and accept her.

He's tall and good-looking. His physical appearance seems almost perfect. However, he's terribly lazy and self-centered. He's such a player and he looks down on women. He's the kind of person that people love to hate. He doesn't want to get involved in other people's lives. He's a very individualistic and selfish person. He tries to avoid anything that requires responsibility. He doesn't have any problem saying no when someone asks for his help. He doesn't feel bad about anything. He loves shoes and collects them. He often argues with his father who isn't happy with his being shallow. Appearance means everything to him. He's very popular with women. He knows many women. He even categorizes them by appearance. According to his classification, Bong-soon belongs to the lowest group. He never wastes his money and time on the 'unqualified' women. He once fell in love with a woman. She was his high school sweetheart. However, after his girlfriend of 7 years left him to marry a doctor, he hates all the doctors in the world. He becomes the bodyguard of the president's son, Jang Jun-won. Ironically, he's a doctor. Bong-ki can never understand Jun-won. 'How can a married man fall for another woman? How can any man fall for Bong-soon?' However, protecting this man is his job. He's confused; it seems that he's instead protecting Bong-soon from Jun-won. He follows Jun-won everywhere; the hospital, operation room, rest room and his house.

He's always smiling. He's as handsome as a movie star. He's very intelligent and kind. The women in the hospital where he's working all agree that he's the sexiest doctor in the country. He's generous, modest and warm-hearted. He's very popular with his patients. It's hard to believe that he's the son of the president. He's not interested in the way he looks. In truth, he doesn't have time to worry about such things. His hair is usually messy and his clothes aren't always clean. Judging by appearance, Bong-ki looks more like the son of an important person. Only a few people know that his father is the president. Without knowing that Jun-won has a bodyguard, people find it strange that Bong-ki is always following Jun-won. He's been married for five years. He has a five-year-old daughter. His wife has been suffering from Alzheimer's disease for three years. Jun-won feels helpless about the fact that he can't do anything to make her better. His in-laws want him to get a divorce and start a new life. However, he can't give up on his wife unless she wants to leave him.