"Drama Special - Mother's Island", everyone in ghost make over 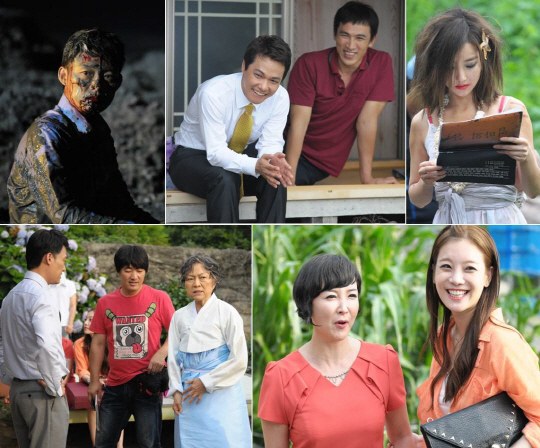 Summer evening feature KBS 2TV "Drama Special - Mother's Island" is being filmed in Baekam-ri in Yeong-gwang. This place well known for "Mapado". The crew and cast of this drama worked hard under the flaming hot sun and in the mud flat.

Kim Yong-rim and Nam Sung-jin, who are actually mother and son are starring in the drama at the same time, were so caring for each other as they wouldn't leave the set while the other was either laying around in the mud flat or filming under the rain at night.

Lee Sang-ah, the first daughter-in-law who pretends to be elegant and graceful but is actually living with her boyfriend after getting divorced, did a great job despite the long break she had. Lee In-hye who takes on the role of Miss Kim, a crazy woman who walks around barefoot and hair down, destroyed the 'goodie two-shoes' image that she once had. According to the concept that she's a weirdo who feeds on live snakes and animals, she's seen with scratches and scars everywhere.

"Drama Special - Mother's Island" is about a mother who is always giving to her children who are busy living their lives in the city. The problems of family and lonely elders is resolved in a spooky way. Even all the staff and supporting staff made up as ghosts to help the atmosphere. To be aired on the 28th at 11:40PM.

""Drama Special - Mother's Island", everyone in ghost make over"
by HanCinema is licensed under a Creative Commons Attribution-Share Alike 3.0 Unported License.
Based on a work from this source