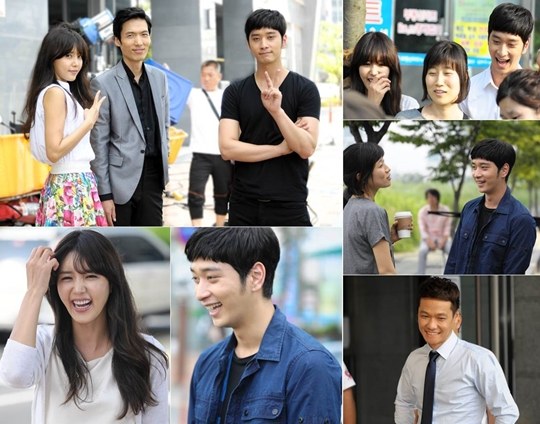 Pictures of the filming set of the KBS 2TV drama special 2013 "Drama Special - Your Noir" were posted on the 8th.

"Drama Special - Your Noir" is about the heart-aching love of Hyeong-joo, the youngest of a gang organization falling in love with the wife of the prosecutor who is after them.

The pictures show contrasting pictures to such tragedy. Chae Jung-an and Hwang Chan-sung are taking care of each other like brother and sister and posing for fans nearby as well. Hwang Chan-sung looks nice with his lean body and bright smile.

Hong Kyung-in, the cold but elite prosecutor also took care of everyone around him including staff. His reason for starring in such a short drama is because it's short but strongly connecting.

"Drama Special - Your Noir" staff say that the atmosphere was so good they worried about the drama not being as heavily set up as it should be.

""Drama Special - Your Noir" Hwang Chan-sung and Chae Jung-an"
by HanCinema is licensed under a Creative Commons Attribution-Share Alike 3.0 Unported License.
Based on a work from this source