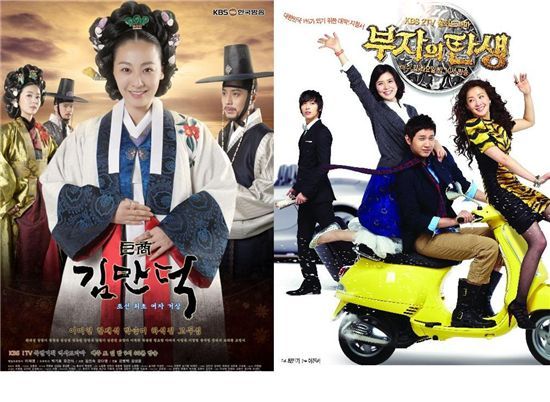 Korean TV series "Merchant Kim Man Deok" and "Birth of a Rich Man" have been sold to Japan's national public broadcasting organization NHK for a total three million dollars, according to KBS Media on Tuesday.

ACC, an affiliate of NHK, purchased the video and broadcasting rights for "Birth of a Rich Man".

Both deals came to fruit at the annual MIP TV Media Market, one of the world's largest fairs for co-producing, buying, selling, financing and distributing entertainment content.

"This was a major deal and 'Merchant Kim Man Deok' in particular was sold for the highest price ever per episode", KBS' New Media team manager Kwon Oh-suk explained.

"Merchant Kim Man Deok", KBS' weekend drama starring top Korean actress Lee Mi-yeon, is the life story of a courtesan who becomes one of the top merchants of the Joseon dynasty.

The show began its run on March 6 and has scored average viewership ratings of 13.4 percent and 13 percent, according to surveys by TNS Media and AGB Nielsen Media Research, respectively.

"Birth of a Rich Man", starring Korean actors Ji Hyun-woo and Lee Bo-young, is about a man who tries to achieve success by finding his long lost conglomerate father.

The Monday and Tuesday series, now into its 13th episode, has seen average ratings of 14.9 percent on TNS' poll and 14.4 percent on AGB's estimate.