"Dream High 2", who are the members with their backs turned? 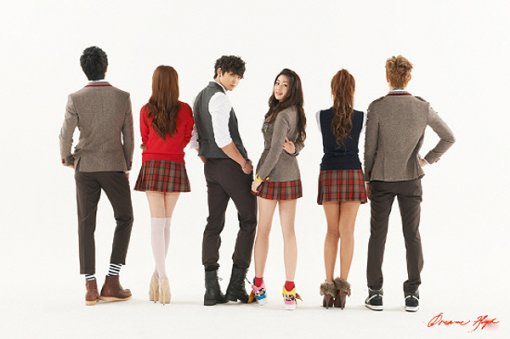 Who is the hidden member for the role of Eden in the drama "Dream High 2"?

KBS 2TV's "Dream High 2" revealed a teaser image of the cast and has netizens acting curious.

In following the original members of Suzy, Kim Soo-hyun, Ok Taecyeon, Wooyoung, IU and more, the new members that fill cast has been revealed.

The six members wearing Kiri Art School uniforms are Kang So-ra, Jeong Jinwoon, Jiyeon and Hyolyn, and the latter two have their backs turned. The two other members have recently been added for the roles of "Eden".

According to the production company on January 4th, the rest of the members will be revealed through the media premiere event. "Dream High 2" will be made with singers and talented rookies.

Those who have heard the news say, "Who is it? I am excited", "I hope it's someone as good looking as Kim Soo-hyun" and more.

Meanwhile, "Dream High 2" will be first broadcast on the 30th of January and the cast includes Kang So-ra, Jeong Jinwoon, Jiyeon, Hyolyn and more.

""Dream High 2", who are the members with their backs turned?"
by HanCinema is licensed under a Creative Commons Attribution-Share Alike 3.0 Unported License.
Based on a work from this source