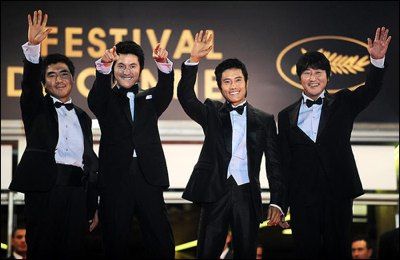 Invited to the Out of Competition section of the 61st International Cannes Film Festival, the Korean movie "The Good, the Bad, the Weird" screened at the Grand Theater Lumiere on Saturday (local time), giving the world its first glimpse at the potential of a bold new genre -- the Korean Western.

Warmly received, a reporter from U.S. film industry magazine Variety wondered why a U.S. distributor had yet to be decided for the movie, while Hollywood actor and director Mel Gibson's Icon Entertainment International snapped up the U.K. distribution rights.

"While In Competition puts an emphasis on the spirit of the times, Out of Competition can be considered the 'flower' of the festival in terms of popular films", the film's director Kim Jee-woon said at a press conference at the Palais de Festival earlier Saturday. "I think the invitation of my movie proves that Cannes recognizes the new experiments being made in Korean commercial cinema".

The Korean movie was in good company in the Out of Competition section, screening alongside Steven Spielberg's "Indiana Jones and the Kingdom of the Crystal Skull", DreamWorks Animation's "Kung Fu Panda", and Woody Allen's "Vicky Cristina Barcelona", suggesting that Korean adventure and comedy movies may have finally overcome the crisis of confidence they have suffered.

Reminiscent of Sergio Leone's 1966 classic "The Good, the Bad and the Ugly", "The Good, the Bad, the Weird" follows three men hounding each other across the Manchurian desert in the 1930s in pursuit of a treasure map. It has drawn attention since production started as it stars three of Korea's top actors -- Song Kang-ho (the Weird), Lee Byung-hun (the Bad), and Jung Woo-sung (the Good).

"The movie reflects Koreans' desires to advance into the Chinese continent beyond the narrow Korean Peninsula", Kim said, brought to life in the wild chase scene on the open Manchurian plain.

The W20 billion (US$1=W1,048) movie is expected to rescue Korea's film industry, currently suffering a dismal slump. The screening at Cannes gave grounds to those expectations, serving as a first step to a recovery of confidence.
______________________________________
From left, director Kim Jee-woon and actors Jung Woo-sung, Lee Byung-hun and Song Kang-ho pose as they arrive for the screening of their film 'The Good, the Bad, the Weird' at the 61st International Cannes Film Festival on Saturday in Cannes. /AFP