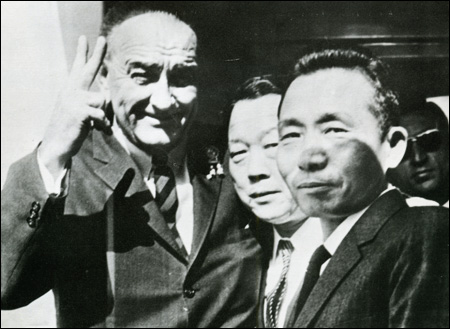 Former U.S. President Lyndon B. Johnson, left, Deputy Premier Chang Key-young, center, and former President Park Chung-hee pose during Johnson's 1966 visit to Korea. It was Chang who first introduced Hwang Byung-tai, a director at the Economic Planning Board, to the late President in 1964.
By Do Je-hae

This book is written by one of his close economic aides who served the late President during the height of nation's economic and industrial transformation in the 1960s-70s. Park rose to power through a military coup on May 16, 1961 and ruled the nation until he was assassinated by the head of the Korean Central Intelligence Agency in 1979. 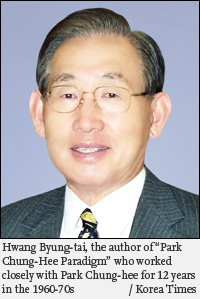 It was and still is uncustomary for a young bureaucrat in his or her 20s to present a briefing to the President, but this is how Hwang came to work as a close aide to Park for 12 years.

Park chaired monthly economic meetings with officials from relevant ministries. It was during one of these meetings that Hwang, then a director at the Economic Planning Board, was instructed by his boss to present the state of foreign investment projects.

After several briefings, Park invited Hwang and Chang to Cheong Wa Dae. "I want you to work as though you were next to me", the former President told Hwang.

"I was physically with the Economic Planning Board, but I was actually the hidden 'secretary for economic affairs' for the President", Hwang recounts in the book.

As director of the Public Loan Office at the Board, Hwang handled foreign loans and investments that Park's economic plan largely depended on. Park expressed his wish to communicate directly with Hwang when the occasion required.

Such a hands-on approach is one of the trademarks of Park's character, according to Hwang.

"When he resolved to do something, he threw himself to achieve it", Hwang wrote.

"For him, the economic development projects came before anything else. He had no consideration for the bureaucratic chain of command or political motivations that could hamper the process of industrial growth. He was more like a founding CEO of a company". 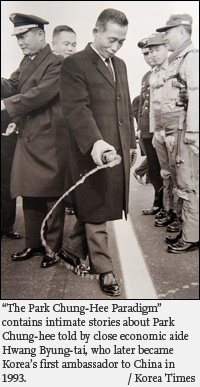 In his book, Hwang focuses on the untold stories of the Park's main achievements like the 428-kilometer Seoul-Busan Expressway; the "Saemaeul" (New Village) Movement for uplifting and reconstructing the countryside and provinces; or the major drive to build up heavy and chemical industries in the early 1970s.

The book allows for a closer graps of how Park led nation-building in the aftermath of the 1950-53 Korean War.

Park's approach is being benchmarked and studied in underdeveloped countries.

Despite being an authoritarian ruler, his economic achievements have been lauded by his successors, like the late former President Roh Moo-hyun (1946-2009).

Roh is recorded as the Korean head of state that made the most number of overseas trips while in office from 2003-2008. Roh had tried to expand Korea's diplomatic relations with Arab and African countries in particular. After retirement, he once told a visiting scholar in his hometown village that many foreign leaders talked about Park during these trips.

Hwang eventually left public service a few years before Park's assassination. He subsequently served two terms as a lawmaker and as the president of the Hankuk University of Foreign Studies.

It was during Hwang's time as Korea's first ambassador to China in the early 1990s that his experience with Park became useful again. Former President Kim Young-sam appointed him to the post in 1993, shortly after Korea officially established diplomatic ties with China in August 1992.

"China was very much interested in the background of Korea's economic prowess. When I was serving in China, former Chinese President Jiang Zemin and other high-level officials wanted me to speak about Korea's knowhow in economic development", Hwang said.

According to the Yeongnam Ilbo in 2002, Jiang had instructed leaders of major provinces to invited Hwang for lectures.

Hwang concludes the book with an analysis on what he calls the "Park Chung-hee paradigm", the unique features of Park's development model, and the correlation between this paradigm and political development.

"Economic aide's story of Park Chung-hee "
by HanCinema is licensed under a Creative Commons Attribution-Share Alike 3.0 Unported License.
Based on a work from this source