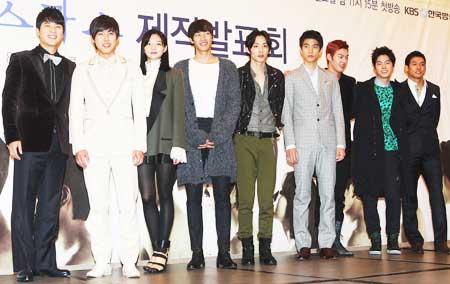 Actors of "Drama Special - White Christmas" pose for a photo at a press conference in Seoul, Monday. / Yonhap

Late Sunday evenings will become spine-chilling at an isolated high school on KBS' "Drama Special - White Christmas" from this week.

Set in a private, elite high school deep in the mountains, the drama deals with a series of deaths, including murder and suicide that take place over eight days.

Seven students and a physical education instructor, as well as a psychiatrist who end up at the school after being hit by a car, spend eight days ― from Christmas Eve to New Year's Day ― together at the school.

Park Mu-yeol, played by Baek Sung-hyun, is an honor student who chooses to remain in school during the winter break after receiving an abusive letter. Baek appeared in movies such as "Marathon" (2005) and "My Boyfriend's Diary" (2006) and dramas including "Running, Goo" (2010).

Model-turned-actor Kim Young-kwang, also known as Young Kim, plays a detested boy Jo Yeong-jae who attacks other people to hide his inferiority complex. Another actor and model Lee Soo-hyuk plays a disturbed, but rich student leading a rock band.
Model Esom is the only female among the cast. Her character Yu Eun-seong was once popular in school before turning after a sudden change of personality. 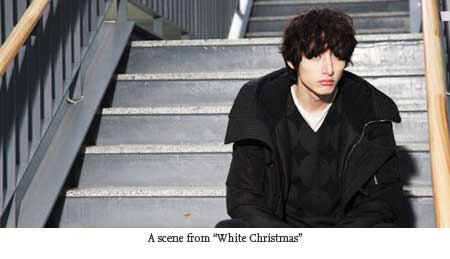 Veteran actor Kim Sang-kyung of "The Great King Sejong" (2008) will perform the role of Kim Yo-han, the injured psychologist.
The drama aims to shed light on evil. "The students are cut off from the outside world and in unstable conditions. What if pure evil absorbs them?'" Park Yeon-seon, scriptwriter of the drama, said. "We will discuss whether evil is organic or environmental".

Park is best known for her 2006 SBS drama "Alone in Love", which portrayed the delicate emotions of a divorced couple.
The average height of the actors in "Drama Special - White Christmas" is 186 centimeters, well above the average Korean man's height.

Park the scriptwriter said height was one of the important factors in casting actors for the drama, at a press conference, Monday.
"We can emphasize posture, height and looks of our drama, the director and I joked", Park said. "This might be the drama composed of the tallest actors".

She added that using rookie actors, instead of veterans, could bring freshness to the drama.

According to Park, high school students are at a volatile stage. "Possibility and anxiety coexist at this time. The balance of both body and mind wavers amid growth. They can be extremely empathetic as well as equally cruel", Park said.

KBS executive producer Lee Gang-hyun said they revived one-act dramas through "Drama Special" last year and the result was good. "As an extension of the successful results, we are introducing four-episode and eight-episode dramas. 'Drama Special' will create the seed of well-made dramas, differentiating from other dramas only seeking high ratings", Lee said.

The series will continue as a four-episode romantic comedy in March.

"Eight chilling days of 'White Christmas' "
by HanCinema is licensed under a Creative Commons Attribution-Share Alike 3.0 Unported License.
Based on a work from this source