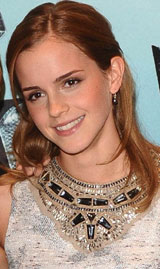 British actress Emma Watson, more recently known for her role as Hermione in the film series "Harry Potter", has named the Korean movie "Breathless" as one of her favorite flicks.

During an interview with Vogue India for its March issue, Watson named "Breathless" by Yang Ik-june, "Amélie" by Jean-Pierre Jeunet, "Pan's Labyrinth" by Guillermo Del Toro and all the works by Richard Curtis among the movies closest to her heart.

Released in 2009, "Breathless" portrays the unlikely emotional connection between a bully from a dysfunctional family and a perky high school girl who isn't intimidated by him due to having grown up with a violent father and brother.

The movie, which Yang both directed and took the leading role in, has caught the attention of critics and audiences alike for its unflinching portrayal of domestic violence, replete with vivid brutality and abusive language.

"Emma Watson Names Yang's 'Breathless' as Favorite Movie"
by HanCinema is licensed under a Creative Commons Attribution-Share Alike 3.0 Unported License.
Based on a work from this source