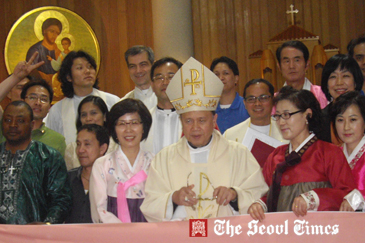 Most Rev. Osvaldo Padilla (center), flanked by priests and migrants, poses for camera at Geodong-dong Catholic Church in Suwon south of Seoul on April 29 (Sunday), 2012 during celebration of the 98th edition of Migrants' Day.

Over 500 migrants drawn from 20 nationalities converged at the Geodong-dong Catholic Church in the Suwon diocese on April 29 (Sunday), 2012 to celebrate the 98th edition of Migrants' Day.

A multicultural choir dressed in traditional attires animated the mass officiated by the Pope's representative from the Philippines, Most Rev. Osvaldo Padilla flanked by five priests from different diocese.

In his homily which focused on this year's theme, "New Evangelization and Leadership", the chief celebrant called on migrants to be evangelizers to each other.

As clergy men work to help migrants accomplish their dreams, the man of God added that the media also has the role to foster new political and social planning that solidifies human relations and assists migrants adapt to new lives.

Although the church is faced with challenges of helping migrants maintain their faith, they keep pushing on with new pastoral methods that give comfort to the despair, he noted.

Most Rev. Osvaldo Padilla recounted his personal experience as a migrant in several countries and encouraged migrants to use their status as an opportunity to spread the word of God wherever they are transplanted to work.

The Migrants' Day event was held under the sponsorship of EMMAUS Suwon.

Following its relentless efforts to assists migrants EMMAUS Suwon was recognized on March 22, 2012 as a legal organization by EMMAUS International Migrants Association in the Philippines.

With the assistance of the Catholic Church EMMAUS has been working over many years to protect the interests and the rights of migrant workers in South Korea.

On Dec. 4, 2000, the United Nations General Assembly officially proclaimed Dec. 18 as "International Migrants' Day" in a bit to redress the increasing number of migrants around the world.

Meanwhile the United Nations General Assembly adopted the International Convention on the protection of the Rights of all migrant workers and their families on Dec. 18, 1990.

In an interview during the event Father John Choi, the organizer of the celebration, said that serving in the migrants community has been one of the most fulfilling time in his pastoral mission.

He encouraged the migrants' community to live by the example of the Easter message and be united as Christ is united with God.

Father Choi reiterated that migrants need the same care and love when they are overseas and that is why EMMAUS came to being.

"I feel at home on this day and nothing to worry about", Alma from the Philippines said.

"It's a feeling of happiness to participate and share love and the fruits of unity in a day like this", Emmanuel from Nigeria expressed similar feeling.

"This celebration has made me understand that home can be anywhere if we can identify ourselves with others through love and the pursuit of happiness", Hien from Vietnam was equally happy.

"Migrants' Day is so significant to me because on this day I meet people from different nationalities who share the same plight like me", Paul from Ghana said.

Migrants came from the Anyang, Suwon, Pyeongtaek, Gwanju and Ansan communities for the celebration. Each community presented a traditional dance and they were all dressed in gorgeous traditional wears which symbolized different nationalities. Certificates were awarded to outstanding volunteer members of the different communities.

The recent influx of migrants in South Korea can be attributed to the country's stable economy and its growing economic influence in the region. Most migrants have Solace in Korea through religious organizations irrespective of their nationalities.

"EMMAUS Korea Marks Day of Migrants"
by HanCinema is licensed under a Creative Commons Attribution-Share Alike 3.0 Unported License.
Based on a work from this source