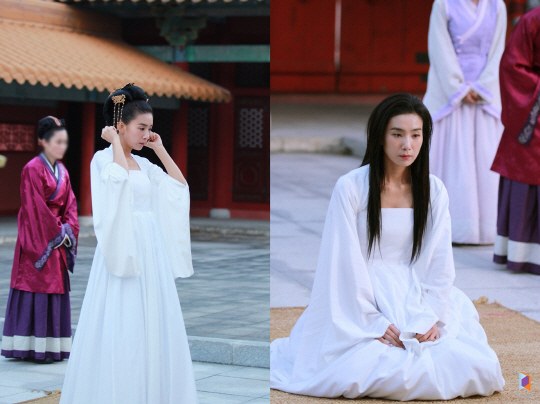 Kim Seo-hyung filmed a scene where she knelt in forgiveness for three hours, outside.

Kim Seo-hyung is going to appear to be begging for forgiveness on tonight's episode. She isn't wearing her royal outfit and is kneeling outside with a pale face and resolute expression.

She had to go through all this with just the undergarments of her costume in the extreme cold but still didn't show any signs of weakness. The wind around the set was very strong as it's a coastal area and the camera had to turned off a couple of times but thanks to Kim Seo-hyung's great performance, things were wrapped up quickly.

"Empress ki" staff say, "The weather is so cold, everyone has it rough. However, Kim Seo-hyung's performance was such a great help. The charisma she gave off made us forget about the cold for a while".

This scene can be seen on the twelfth episode of "Empress ki".

""Empress ki" Kim Seo-hyung kneels in the cold"
by HanCinema is licensed under a Creative Commons Attribution-Share Alike 3.0 Unported License.
Based on a work from this source