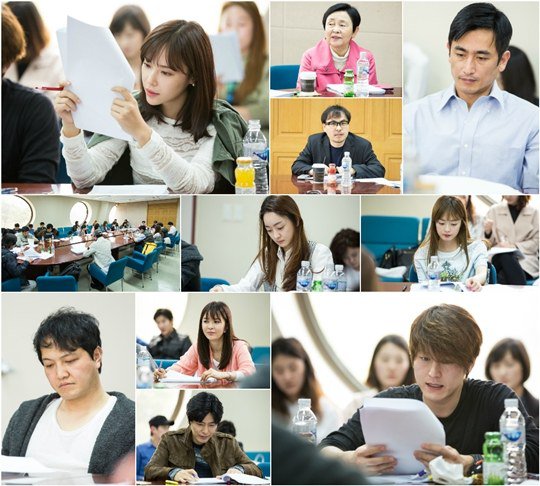 Hwang Jung-eum arrived at the drama center 3 hours prior to the script reading and practiced riding the motorcycle. At the reading session, she engaged herself into the situation and let tears drop from her eyes. The crew said, "We understand why she's become such a hit maker".

Cha In-pyo is returning with a drama for the first time in a long time but still had the air of charisma around him. He also made sure to make eye contact with everyone he spoke to during the reading.

Ryu Soo-young was enthusiastic about the reading and displayed awesome teamwork with Hwang Jung-eum although it's his first time working with her.

Seo Hyo-rim and Jeon So-min had been on a break until now but they seemed re-energized and lit up the atmosphere.

Jung Woong-in too, was different. He was exactly what his character should be and said, "I'm creating a different kind of bad guy, someone only Jung Woong-in could be".

"Endless Love" is a long term drama about the passion, dream and love of the characters who lived through the 1970s to 90s.

"Endless Love" is produced by Lee Hyeon-jik from "Warrior Baek Dong-soo" and written by Nah Yeon-sook from "Life Isn't Over". To be broadcasted in June.

""Endless Love" script reading, Cha In-pyo, Ryu Soo-young and Jung Woong-in"
by HanCinema is licensed under a Creative Commons Attribution-Share Alike 3.0 Unported License.
Based on a work from this source