Environment through the lens (18) 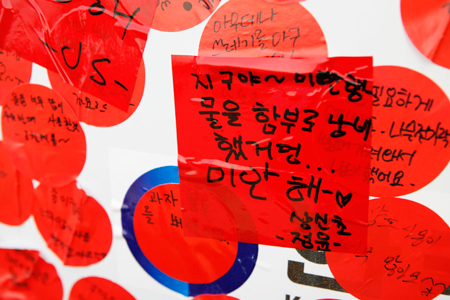 Messages from children are pasted on a window at the Seoul Green Film Festival at Samgam CGV last year, the one in front reading "Earth, I am sorry for having mindlessly wasted water", written by a Jong-yun of Sangshin Elementary School. / Courtesy of the Korea Green Foundation

Environmental challenges have no borders. This confirms the reality that environmental problems have to be dealt with from an international and common perspective.

"The simplest way to approach environmental problems is through the camera. This is why I will be organizing environmental film festivals in Korea.

This is what I told the world congress of Friends of the Earth in Interlaken in Switzerland in 2002. At the time, I was the secretary general of the Korean Federation for Environmental Movement and participated in the congress to become a formal member. 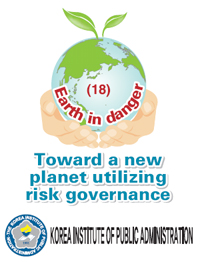 There are virtually countless numbers of film festivals in the country with different sizes and themes. Most of them are supported by provincial governments and participated in by local residents.

But there are also numerous film events of high caliber that do not run on government funding on subjects ranging from women and the environment to human rights. Seoul Green Film Festival has now grown to be one of the top three in its category in the world.

In the beginning, the festival received submissions from various countries, went through the reviewing process and decided which of the films would be featured, as in any other international film events.

The problem was that there were questions on the nature and subject of some of the films, as to whether they could be considered as related to the environment. As the years passed, the number of films submitted increased and this year, we received more than 830 entries from 64 countries.

With the increasing number of entries, there were more opportunities to select the best items that meet our basic objectives in organizing the festival.

A film festival is an event in which people can view the interests of the world in a single location. This brings out the contrast in local and foreign films and documentaries and the level of their quality.

Foreign films tend to bring reality to life in the diversity of their subjects, and are wide-ranging. Local films have come a long way in the commercial category, but still leave much to be desired in terms of documentaries. The main reason for this is the audience – this is small few in Korea but large in regions such as Europe.

However, there are common aspects of both local and foreign films. In both, the subject is usually a confrontation between victims and those who inflict the damage. And there are usually few national boundaries.

The movie "Pipe" from Ireland, which won the grand prize during the 8th festival, depicts the conflict between residents of a peaceful village and the major oil company Shell of the United States which was trying to set up a pipeline network for natural gas through the village.

Looking at the themes of the festival, environmental issues of that year are intact.

During the 1st Seoul Green Film Festival, the theme was "Green Playground in the Heart of the City". Designed to be a non-competitive international event, we looked to focus on global environmental issues. The event was also focused on "trees" and brought in entries like "Cloud in May" and "The Beautiful Life of a Tree".

The main theme of the second festival was nuclear power and introduced "The Children of Chernobyl" by Marianne Dreo, focusing on and looking back at the biggest nuclear accident in human history. Other entries included films protesting the construction of nuclear power plants. One was "People Protecting the Plaza", telling the story of residents in Dal County who did not want the installation of a nuclear waste repository in their neighborhood.

When thinking about a film on the environment, it is easy to depict documentaries and philosophical deliveries but this is actually not the case. There are many films, which are fun and emotional, showing complete stories. This is one of the reasons environmental films are made in the first place.

During the 3rd Seoul Green Film Festival, a total of 108 entries from 21 countries were presented. Those involved said the event came alive with pieces on everything from community movements to environmental science, turning it into a major "thematic film festival".

Compared to the second festival, the number of attendees doubled and 29 of the presentations, including the opening film "Five Past Nine" were sold out. Another attraction was "Girl Riding a Bicycle" starring and produced by Yoo Ji-tae, a popular Korean actor.

The main environmental issue in 2007 was disasters caused by global warming. During the Fourth Seoul Green Film Festival, there were numerous entries focused on the seriousness of damage caused by climate change.

Among them was "Great Warming" by Michael Taylor narrated by the actor Keanu Reeves and singer songwriter Alanis Morissette. It was a documentary on the reality that the effects of global warming could be turned around or made worse; and the need for a commitment by mankind to prevent worse disasters.

Then there was the massive oil leakage in Taean from the vessel Herbei Spirit, which completely changed the lives of residents in the region. This was the main theme of the movie "Ocean" – the cradle of Taean and its residents, during the 5th Seoul Green Film Festival.

There were numerous other entries which centered on oil spills around the world and the environmental devastation they caused. The number of attendees at the annual festival increased by more than 61 percent over the previous year, showing the rise in public interest in environmental developments.

The keyword for the 6th Seoul Green Film Festival in 2009 was "Energy". The depletion of crude oil has led to a time where the price of gasoline remains extremely high, and a number of entries presented ways in which the use of energy can remain sustainable.

Among them was "Burning the Future" by David Novak which delved into the coal industry in the United States and conflicts that were taking place among residents of West Virginia. "A Land of wind and Sun" was a documentary on the introduction of new-recycled energy by Indian aborigines in America.

There is also the important issue of water. More than 70 percent of the planet is covered with water. But do we have enough to supply ourselves? Following the issue of black gold, another term for oil, the seventh film festival moved on to the issue of water.

The main presentation was "Blue Gold" by Sam Bozo and other presentations looked at the importance of water from different perspectives for sustaining our basic lives.

There were numerous issues addressed during the 8th Seoul Green Film Festival last year. Millions of cows and pigs were buried because of foot-and-mouth disease and the earthquake – one measuring an astonishing 9.0 on the Richter scale – and tsunami in Japan last March caused serious damage to the Fukushima Nuclear Power Plant, leading to the leakage of radiation.

"Into Eternity" by Michael Madsen is a documentary covering the world's first nuclear plant in Finland, which received the Grand Screen Prize at the Amsterdam Documentary Film Festival in 2010.

While the environment is complex, films are simpler. By watching films at the Seoul Green Film Festival, people can remain in touch with environmental issues around the world. And it is an easy way to study and learn about the environment.

Attendees at the 1st Seoul Green Film Festival were a mere 18,000 but this had grown to nearly 80,000 by the eighth event. This is indicative of the fact that people are becoming even more interested in the environment they live in and what is happening to it.

As we prepare for the 9th Seoul Green Film Festival from May 9 to 15, we recognize that this is an opportunity to look back at the past two decades of our environment, especially with the 20 anniversary of the Earth Summit in Rio de Janeiro in 1992 coming up.

The event this year will present a wide range of films that can be enjoyed by families, children and adolescents, and this is the purpose of the festival. It is designed to bring environmental issues to the attention of people of all ages in a more pleasant and practical way. 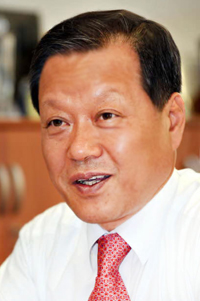 And the thinking should be that environmental movements are not necessarily only about activists, but designed to help preserve nature for mankind. When we discard nature, nature discards us. By bringing elements of the environment to people in a gentle fashion, we create an avenue for them to get a better understanding of the world we live in and how we can help preserve it for future generations.

Choi Yul, president of the Korea Green Foundation, has played a key role in the environmental movement in South Korea and has been inspiring people to demand their rights to a healthy environment for the last 35 years. In 1988, Choi became the first chairman of the Korean Anti-Pollution Movement (KAPMA). He was put under house arrest for the activities related to nuclear waste disposal problem. In 1992, he worked as the director of the Korean NGO Committee for the Earth Summit in Brazil. In 1993, Choi reorganized activists around the country by launching the Korean Federation for Environmental Movement (KFEM).

"Environment through the lens (18)"
by HanCinema is licensed under a Creative Commons Attribution-Share Alike 3.0 Unported License.
Based on a work from this source