Eom, Moon to perform in 'Closer' 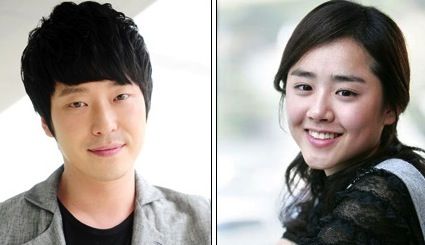 Actor Uhm Ki-joon and actress Moon Geun-young will return to the stage in the play "Closer" next month as part of the Play Festival 2010 titled "I Love the Stage" in Daehangno.

The play by Patrick Marber revolves around four young men and women through love, truth and relationships. Since it premiered in 1997 in London, it has been staged in more than 100 cities in the world and translated into 30 languages.

The drama was also adapted into a film starring Natalie Portman as Alice and Jude Law as Dan in 2004. Eom will play Dan in the upcoming show, while Moon will take on the role of Alice.

Better known as a musical actor, Eom debuted in the play "Richard III" in 1995 and has starred in numerous musicals including "Singing in the Rain", "Grease", "Hedwig and the Angry Inch", "Finding Kim Jong-wook" and "The Three Musketeers".

His popularity increased after he appeared in television dramas and sitcoms such as "Kimchi Cheese Smile", "Good Job, Good Job" and "Hero - Drama". Eom recently starred in the film "Man of Vendetta" with actor Kim Myung-min.

Moon rose to stardom in the popular television drama "Autumn in my Heart" in 2000. Renowned as a CF (commercial) star, she has appeared in "A Tale of Two Sisters", "My Little Bride" and "Love Me Not".

Moon returned to television dramas in "Painter of the Wind" in 2008 and "Cinderella's Sister" this year.

For the festival, the Aga Company will present eight plays _ "Fool for Love", "Closer", "True West", "Proof", "Art", "That Face","Three Days of Rain" and "Kiss of the Spider Woman" _ for nine months. The festival is designed to boost small theater works and develop the local theater culture as a whole with a star-studded casting strategy to help the audience feel familiar with the stage.

"Closer" will play for two months at Art One Theater in Daehangno, central Seoul with dates yet to be finalized. For more information, visit Open the link

"Eom, Moon to perform in 'Closer'"
by HanCinema is licensed under a Creative Commons Attribution-Share Alike 3.0 Unported License.
Based on a work from this source