Eugene and Ki Tae-young: 'We Wed in July' 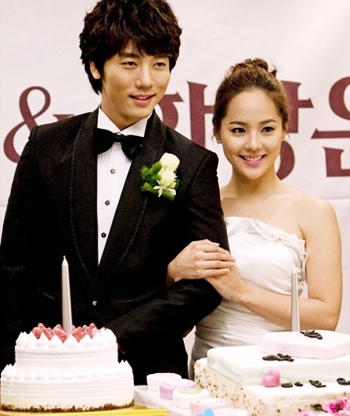 Actress Eugene (30), a former member of the star singing group SES, and actor Ki Tae-young (33) will wed this coming July. The two actors announced their marriage by posting their personal messages on their respective fan club websites at around 1 pm on May 11. Eugene posted a message entitled "I inform you" and said, "I will become a July bride. My dream of getting married before the age of 33 can finally come true.

The drama 'Creating Destiny' actually created my beloved destiny". She revealed that her bridegroom to be would be Ki Tae-young who appeared together with her in the MBC drama "Creating Destiny". Ki Tae-young also wrote a message entitled "It is the time" and said, "I will get married in July. I could finally find the woman whom I have always dreamed of and whom I can form a family with. As you may be able to assume, the woman is Eugene". The two actors met and eventually began dating when they both appeared in "Creating Destiny", which aired in October, 2009. Ki Tae-young's agency said, "They will hold a private wedding at a church located in Indukwon on July 23 with only their family members and close friends attending".

They will officially announce their wedding and their wedding plan in detail at the press conference to be held after Eugene holds the party to commemorate the publication of her book entitled "Get It Beauty" on May 23. Eugene has been hosting the beauty program "Get It Beauty" on the cable channel On Style, and Ki Tae-young is reviewing potential next works in which to appear after finishing his current drama "Royal Family".

"Eugene and Ki Tae-young: 'We Wed in July'"
by HanCinema is licensed under a Creative Commons Attribution-Share Alike 3.0 Unported License.
Based on a work from this source