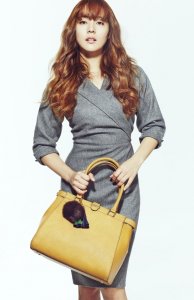 Eugene (Eugene) becomes the mother of a child and a lucky woman who receives the love of three men--Jo Hyun-jae, Jae Hee and Sin Seong-rok--one of whom is the father of the baby.

The new KBS 2TV (Wed./Thurs.) drama "Three Dads, One Mom" is about a married couple who receives sperm donations from three of the husband's friends. Although the conception is successful, the wife loses her husband suddenly in an accident. The story continues with the wife and the three friends.

Eugene plays the role of the widowed mother, "Song Na-young", but this isn't her first role as a mother. In 2005, the actress starred in the MBC drama "Wonderful Life" as a young woman who gets pregnant and thrown into married life after a night of bad judgments.

"Back then, the baby wasn't planned, but this time the baby is, so I can be much more of a proud mommy", Eugene (Eugene) said. "In the other drama, my husband didn't love me, but for this one I receive the love of three men, though I do lose my husband".

She laughingly added, "The three men are so wonderful, I could live with all of them!"

"Three Dads, One Mom" will fill the time slot of "Hong Gil Dong". It is directed by Lee Jae-sang. who produced "Dalja's Spring", and written by Jo Myeong-joo. who also wrote "The Man of the Vineyard".